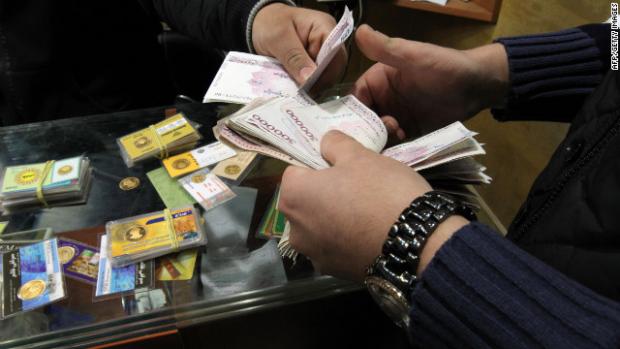 (PHOTO - An Iranian trader exchanges a gold coin for cash in Tehran as sanctions make currency plummet in value)
(CNN) -- About 15 years ago, when the United States was first experimenting with wide-ranging sanctions against Iran, an Iranian acquaintance remarked to me, "I certainly hope Iran doesn't become another Cuba."

At that point, the U.S. had imposed a total embargo on Cuba for more than three decades. As he said it, I detected that part of him could not believe that a rich and cultured nation on the other side of the globe could ever be treated like an island dictatorship off the American coast. But I also saw a glint of apprehension in his eyes as he considered for the first time how America's vision of its own national interests could change when viewed through the prism of raw domestic politics.

The cases are not at all the same. Yet today, Cuba has been under U.S. embargo for 50 years, and Iran has passed the 16-year mark. Cuba experienced a U.S.-sponsored invasion before the sanctions began. Iran is still waiting for its Bay of Pigs.

When the Obama administration came into office, talk was all about "smart sanctions." President Obama's foreign policy advisers had seen what indiscriminate sanctions had done to Iraq. Ordinary lives were destroyed and, in the words of a friend whose family was in Iraq, the entire middle class was criminalized, driven to smuggling and black-market dealings just to survive.

The sanctions also created a sympathetic backlash with the Iraqi population and visceral anti-Americanism throughout the world. We were not going to make that mistake again. Instead, we would target sanctions only against the decision-makers and abusers.

Yet today, the sanctions regime in Iran is resembling, more and more, the Iraqi and Cuban cases. We have arrived by a very different route. Instead of controlling all goods going into the country, we have ingeniously found ways of manipulating Iran's banking system. That, together with regional boycotts, has the prospect of blocking a large proportion of Iran's oil sales.

1 Comments in Response to Are we headed for a Bay of Pigs in Iran?

"smart sanctions." Smart meters for electric, gas and water, smart phones, smart living---another name for Agenda 21---smart cars. Smart, smart, smart... I for one am tired of hearing the word, 'smart' attached to everything under the sun. From now on, when any person in a govenment position uses that word, concider them the enemy. And for every person that goes to work for one of those 'smart' companies, put them in the same catagory as enemies. Don't let them off the hook just because they want to get a paycheck of fiat money. If they are ignorant, that will have to fall on them. Everything now called, 'smart', is against the public.---Again, you don't have to believe me, just look around and see it for yourself before it has consummed you, and that will not be for your welfare.