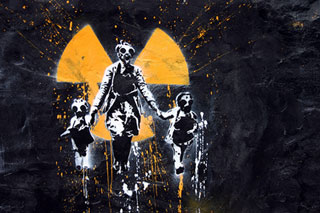 Super Tuesday demonstrated the rancor rife in Republican ranks, as the four remaining major candidates slug it out to see how far to the right of President Barack Obama they can go. While attacking him daily for the high cost of gasoline, both sides are traveling down the same perilous road in their support of nuclear power. This is mind-boggling, on the first anniversary of the Fukushima nuclear disaster, with the chair of the U.S. Nuclear Regulatory Commission warning that lessons from Fukushima have not been implemented in this country. Nevertheless, Democrats and Republicans agree on one thing: They’re going to force nuclear power on the public, despite the astronomically high risks, both financial and environmental.

One year ago, on March 11, 2011, the Tohoku earthquake and tsunami hit the northeast coast of Japan, causing more than 15,000 deaths, with 3,000 more missing and thousands of injuries. Japan is still reeling from the devastation—environmentally, economically, socially and politically. Naoto Kan, Japan’s prime minister at the time, said last July, “We will aim to bring about a society that can exist without nuclear power.”