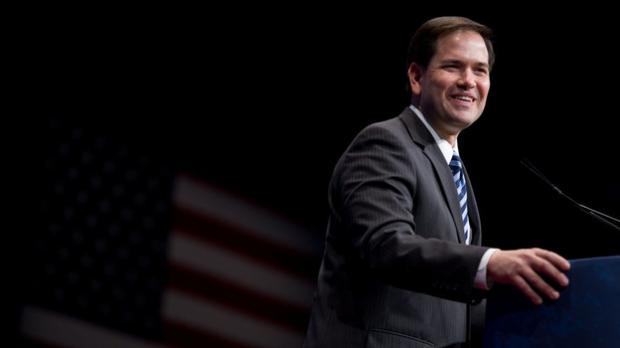 Throughout the Republican presidential primary season, whenever there's talk about a short list of possible running mates, one name is nearly always at the top — Florida Sen. Marco Rubio.

Rubio has only been in the Senate for a little more than a year, but his appeal is obvious. He's a young, charismatic, conservative Hispanic.

But as his national profile has risen, he has become a target for Democrats and advocacy groups who say he doesn't represent Latino voters.

Helping to lead the chants was Esteban Roncancio. He's 20 years old, studying computer engineering at Miami Dade College and is an undocumented immigrant. He's a prime candidate for the DREAM Act, a bill that would give students and members of the military who are in the U.S. illegally a path to legal residency.

According to surveys conducted by the Pew Hispanic Center, more than 90 percent of U.S. Hispanics support the DREAM Act. Rubio opposes it.

Roncancio said that shows Rubio is out of step with his community. "Especially among young Latinos," he said, "we don't feel that we're similar to him. We want him to really be with his people, with his community, instead of with anti-immigrant Tea Party policies."