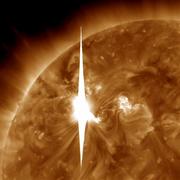 WASHINGTON (AP) -- One of the strongest solar storms in years engulfed Earth early Thursday, but scientists say the planet may have lucked out.

Hours after the storm arrived, officials said were no reports of problems with power grids, GPS, satellites or other technologies that are often disrupted by solar storms.

But that still can change as the storm shakes the planet's magnetic field in ways that could disrupt technology but also spread colorful Northern Lights. Early indications show that it is about 10 times stronger than the normal solar wind that hits Earth.

The storm started with a massive solar flare Tuesday evening and grew as it raced outward from the sun, expanding like a giant soap bubble, scientists said. The charged particles were expected to hit at 4 million mph.

The storm struck about 6 a.m. EST in a direction that causes the least amount of problems, said Joe Kunches, a scientist at the National Oceanic and Atmospheric Administration's Space Weather Prediction Center.

"It's not a terribly strong event. It's a very interesting event," he said.

1 Comments in Response to Biggest solar storm in years hits, so far so good

Only goes to show you that Scientist are not as smart as a Fifth grader.