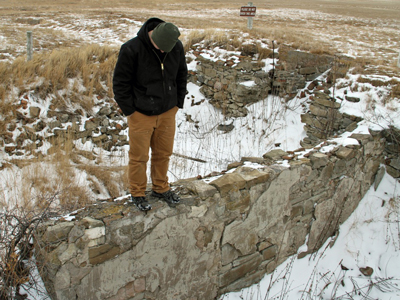 I was sent to Williston, North Dakota to look into the booming oil scene and find out what it takes to get a job.

My first morning there, I met a young man living in his van who had showed up two weeks ago and quickly found employment.

It was five degrees at 7:20 in the morning when I stumbled upon James Woodward in the parking lot of the Williston Community Center. For $3 a day workers hit the community center for a shower and try to find out who's hiring among the employed workers.

He was crouched down; boiling some shrimp flavored Ramen noodles on his camp stove. I talked with him while he ate his breakfast in the cold. It started snowing and messing up my notes, so I sat in my rental car, scribbling as he talked.

He finished by saying he was only working part-time at the moment and didn’t have to be to work until six.

He did, and ended up spending the next couple of days going around with me while I took pictures and talked to anyone who’d stand still long enough to offer an opinion.

Man Fired For Not Taking The Vaxxx . . . And Then This Happened