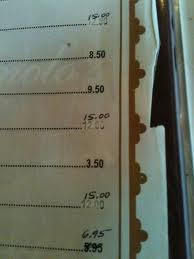 I’ve been having breakfast at Cafe Manolo’s ever since I started coming to Panama, going on ten years now. They make the best ‘batido’ ever… it’s sort of like a milk shake crossed with a fruit smoothie. And it used to be ridiculously cheap. Not anymore.

Economists use a term ‘menu costs’ to explain why retail prices are ‘sticky’ and resistant to change. The analogy is that, even in the face of rising input costs, a restaurant owner will resist raising his prices because it costs a lot of money to print new menus.

Apparently someone forgot to explain this concept to Mr. Manolo. Rather than printing new menus, the staff at this once cheap establishment simply scratches out the old prices and scrawls in the new prices.
Without doubt, Panama is becoming very expensive. And if they handed out Academy Awards for inflation, I’m sure the first person that Panama would thank in its tearful acceptance speech would be none other than one Ben Shalom Bernanke, Ph.D.