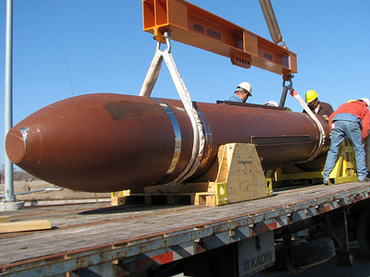 The US may use a 13,600-kilogram bunker-buster bomb that is currently being developed for a strike on countries like Iran. The “great weapon” is designed to knock out underground nuclear facilities and would supersede Israeli force if used in Iran.

“It has great capability now and we are continuing to make it better. It is part of our arsenal and it will be a potential if we need it in that kind of scenario,” said Lt. Gen. Carlisle at a US defense conference on Thursday.

The weapon, known as “the massive ordnance penetrator”, is capable of smashing through 65 meters of reinforced concrete before detonating its target.

The Pentagon has already begun work on an array of military options if the heavy sanctions currently imposed on Iran fail to curb its alleged atomic weapons program. US Defense Secretary Leon Panetta told US publication The National Journal that such plans had been in the pipeline “for a long time.”

Panetta went on to say that if a strike was made on Iran’s atomic weapons facilities then the US was better equipped to do it than Israel.

“If they decided to do it there’s no question that it would have an impact, but I think it’s also clear that if the United States did it we would have a hell of a bigger impact,” said Panetta.

Although the Obama administration has emphasized that it prefers diplomatic and economic sanctions to pressure Iran into curtailing its military activities, Panetta and Obama have said that “no options are off the table.”