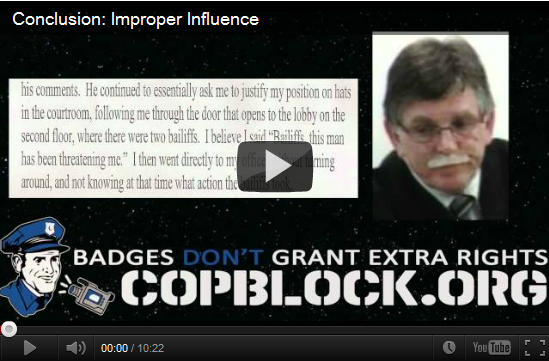 Before anyone jumps on me, yes, I know that ANY job comes with perks. Things like free cheeseburgers for the McDonald’s staff, the use of the company car for a CEO or whatever one’s trade might be, it most likely comes with some perk. When employed by the government though the perks get really good.

While a large number of those accused of a crime face questioning, time in jail and hefty legal expenses those employed by the government rarely face their own wrath. I could go on and on about public officials that commit cold blood murder, rape and theft but I’d like to point to a closer incident.

Last June I was arrested while asking Edward Burke – who’s employed as a district court judge in Keene, NH – three questions about him enforcing contempt charges on people wearing hats in a public courtroom (and here)? Edward first stated that I had threatened him, which was completely false (as seen in the video), and tried to get out of it the only way he knew how – lie. Which is why I asked “the system” (aka Keene Police) to investigate Edward for filing a false report with law enforcement (or lying to them effect an arrest). After being passed around from the Keene Police to the New Hampshire Attorney General’s office, the file finally landed on Marc Hathaway’s desk – who’s employed as a NH county attorney. It took Marc over six months to write his review.

Below – in Scribd – is Marc’s entire analyst of the case and the reasoning behind his decision to not prosecute Edward or myself. IMO, and most who see the video, there was never a case against me. The only thing I did wrong that day was piss off a man who, for some unknown reason, has the power to jail me with half the effort anyone else would need. From there on the double standard was applied to the fullest.

If Edward wasn’t a judge, the police would have showed up and most likely arrested him that morning. Especially if he lied to them, with the hopes that they’d jail me instead of him. I know this because Timothy Peloquin, had Edward not been a judge, would have viewed the video on my camera that morning. Instead he listened to Edward and arrested me.

I filed the complaint with the police to prove one thing, that nothing would be done to a person who works for the system. I’d also like to note that I don’t think lying to police should be a crime that is punishable via the justice system. People naturally disassociate with liars and I don’t need the state to dish out that justice for me, with their price tage. I don’t want to see anyone go through this system but if anyone had to and for something, it might as well be Edward.

In the video above I highlight how Edward broke the the law he swears to uphold, something he’s most likely judged someone for in the past, and was caught red handed doing so. Yet, nothing was done to him. No trip to the police station, no pending court dates, no photographs, no finger prints and no interviews by district attorney’s or police.

When you’re at work next reaping a perk of your job, think of how good it is to be a Edward Burke. Sure, the crime was minor but thanks to his job, that the public pays for because they fear being caged by the government, Edward skipped the usual process the system uses to break people into taking plea deals and/or spend thousands defending themselves.

I’ll let you be the “judge”, was this investigation righteous?

Brandon Smith: Organizing Patriots In The Face Of Government Informants And False Flags