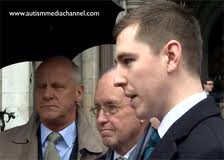 "We are absolutely delighted with this judgment, which vindicates Professor Walker-Smith. John Walker-Smith was one of the world's leading gastroenterologists. It was incomprehensible that he should have been threatened with being struck off in the first place. This judgment calls into question the independence and competence of the GMC, which was determined all along to pursue a witch-hunt against Professor Walker-Smith, Dr. Andrew Wakefield and Professor Simon Murch after they reported their research into the link between bowel disease and regressive autism." Throughout the hearings (the longest in GMC history) the GMC deliberately chose to cherry-pick the evidence to suit their prejudice against these doctors, who had always acted in the very best interests of the children they treated." – David Thrower, autism father

Dominant Social Theme: What? Huh? What gives? Ridiculous. These men set vaccines back by a century!

Free-Market Analysis: Wow. The first reversal. You can see the report in the video below. What a big one it is. Andrew Wakefield himself, the most reviled medical man of the 21st century, is well on his way to being vindicated now, from what we can tell.

This is surely a big story (though please note the media is not treating it as one). And the import is increased because Big Pharma has literally leveled all its guns at Wakefield in an attempt to discredit his claim that some kinds of vaccines might be involved in the development of autism.

If you examine the unfolding saga, you will be provided not just with tempestuous slander of Wakefield, but a timeline of the Internet Reformation itself.

We are fond of writing that the Internet is a process not an episode, and that the power elite that evidently and obviously wants to run the world (formally as opposed to informally) still has no idea how to deal with its revelations.

What happens is that the top elites – those that control central banking and use the proceeds to nurture world government – continually utilize the tools of control that worked in the 20th century but not the 21st. The fabulously wealthy old men seem to have no idea what to do. Or so we surmise.