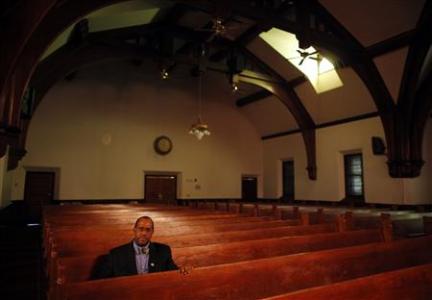 (Reuters) - Banks are foreclosing on America's churches in record numbers as lenders increasingly lose patience with religious facilities that have defaulted on their mortgages, according to new data.

The surge in church foreclosures represents a new wave of distressed property seizures triggered by the 2008 financial crash, analysts say, with many banks no longer willing to grant struggling religious organizations forbearance.

Since 2010, 270 churches have been sold after defaulting on their loans, with 90 percent of those sales coming after a lender-triggered foreclosure, according to the real estate information company CoStar Group.

In 2011, 138 churches were sold by banks, an annual record, with no sign that these religious foreclosures are abating, according to CoStar. That compares to just 24 sales in 2008 and only a handful in the decade before.

The church foreclosures have hit all denominations across America, black and white, but with small to medium size houses of worship the worst. Most of these institutions have ended up being purchased by other churches.

Buckle Up! It's All Crashing Now By DESIGN!

When a Train Wreck Is No Accident