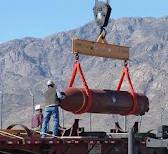 A top US Air Force general has described the biggest conventional warhead – the 30,000-pound bunker buster bomb – as “great” for a military strike on Iran.

Such glib comment about a massive killing device comes in the same week that US President Barack Obama appeared to caution against “loose talk” about war in the Persian Gulf.

“The massive ordnance penetrator [MOP] is a great weapon,” said Lieutenant General Herbert Carlisle, the US Air Force deputy chief of staff for operations, who added that the bomb would likely be used in any attack on Iran ordered by Washington.

The MOP also referred to as "The Mother of All Bombs" is designed to drill through 200 feet of reinforced concrete before detonating its massive warhead. It is believed to be the biggest conventional, non-nuclear, weapon in the American arsenal. In terms of destructive capability, it can be said to be the most fearsome explosive weapon among a range of massive-blast ordnance developed by the Pentagon over the past decade.

"A 30,000-pound (13,600-kg) bunker buster bomb designed to smash through some 200 feet of concrete before exploding is a "great weapon" that could be used by U.S. forces in a clash with Iran over its nuclear program, an Air Force general said on Thursday.

The Pentagon has begun working on military options if sanctions and diplomacy fail to prevent Tehran from building a nuclear weapon.

Defense Secretary Leon Panetta told the National Journal in an interview on Thursday that planning had been going on "for a long time."

Your decision right now will determine if you survive...Buy a year supply of food if you can.

IT IS TIME TO PUT THE CONTEXT OF FEMA CAMPS INTO THE COUP THAT HAS TAKEN OVER...