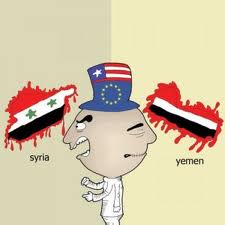 There is clear and overwhelming evidence that the uprising to overthrow President Assad of Syria is a violent, power grab led by foreign-supported fighters who have killed and wounded thousands of Syrian soldiers, police and civilians, partisans of the government and its peaceful opposition.

The outrage expressed by politicians in the West and Gulf State and in the mass media, about the ‘killing of peaceful Syrian citizens protesting in justice ’ is cynically designed to cover up the documented reports of violent seizure of neighborhoods, villages and towns by armed bands, brandishing machine guns and planting road-side bombs.

The assault on Syria is backed by foreign funds, arms and training. Due to a lack of domestic support ,however, to be successful, direct foreign military intervention will be necessary. For this reason a huge propaganda and diplomatic campaign has been mounted to demonize the legitimate Syrian government. The goal is to impose a puppet regime and strengthen Western imperial control in the Middle East . In the short run, this will further isolate Iran in preparation for a military attack by Israel and the US and, in the long run, it eliminates another independent secular regime friendly to China and Russia .

In order to mobilize world support behind this Western, Israeli and Gulf State-funded power grab, several propaganda ploys have been used to justify another blatant violation of a country’s sovereignty after their successful destruction of the secular governments of Iraq and Libya .