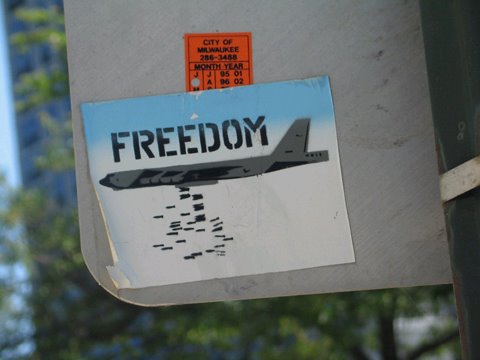 Ever since its creation, the US has had a role to play in combat operations worldwide. Today the country’s public opinion is dominated by warfare, making American society all-too-easily manipulated and turned against practically any country.

­The US has a strong record of persuading the public that war is the only way.

A military industrial complex worth billions of dollars is largely America’s driving force. Deeply rooted in the system, it would serve no purpose if there was no one to fight.

“If there were no more enemies left, there would be a loss of a sense of mission,” anti-war activist and journalist Don Bebar told RT.

Serving Americans are on permanent stand-by to deploy to battle zones on command.

“The US army flag has 183 campaign ribbons on it. Those 183 ribbons each represent wars,” Iraq war veteran Matthis Chiroux from New York shared with RT.

“When you compare that to the 236 years that we’ve actually been around as a country, you’re talking about a war on average of once every year and three months,” he calculated.

Vietnam Anyone? US Lawmakers Call For Military Advisors To Ukraine!

The Biggest Lie The Hawks Ever Sold: Notes From The Edge Of The Narrative Matrix

Canada To Spend Billions On NORAD So US Can Rule World

BREAKING: THE PENTAGON ADMITS TO 46 BIOLABS IN UKRAINE!

What Are the Prospects for Peace?

Warmongers In Politics, Wolves In Pulpits

GHOSTS IN THE MACHINE - (WTF?)