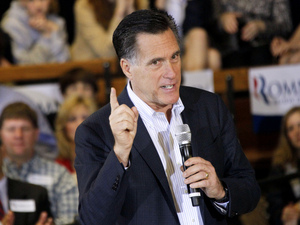 Mitt Romney picked up some support in Saturday's contests, but there may be trouble lurking for him in the near future as the GOP race moves to the Deep South.

Despite his second-place finish in Kansas, Romney scored victories Saturday in caucuses in Guam, the Northern Marianas and the U.S. Virgin Islands. He also won county conventions in Wyoming.

Tuesday's primaries are in Alabama and Mississippi, and the reddest of states are proving to be a tough sell for the former Massachusetts governor. He's trying his best to connect with the Republican base.

On this swing through Dixie, Romney seems to have picked up a new twang, greeting crowds with "Morning, y'all!" He's also trying a new diet of biscuits and grits.

"Some of us have been saying 'y'all' all our lives, and you know it," says attorney David Allen of Biloxi, Miss. "But you take somebody from Massachusetts who says 'yawl,' you know he is not from here."

Allen still hasn't decided who he'll vote for on Tuesday, but Romney's not in the mix.

"To me, too much of what he does is scripted, and I'm just not real comfortable with that," he says.