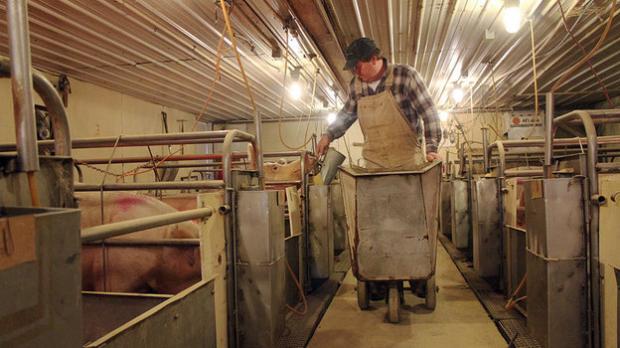 After a series of videos revealing apparent cruel treatment of farm animals went viral, Iowa has made it a crime for people to misrepresent themselves to gain access to a farm. The so-called "Ag-Gag" law targets undercover animal rights activists who secretly take videos. Farmers say they need the legal protection to block those trying to take down agriculture, but critics ask what the industry may be hiding.

The impetus behind the law comes from videos like one by Mercy for Animals filmed by undercover activists who got jobs as farm workers.

"In the next few minutes, you'll be given an eye-opening look behind the closed doors of modern farms, hatcheries and slaughter plants," the video begins, "revealing the journey that animals make from farm to fridge." The images are graphic, showing the slaughter of chickens, pigs and cows. Mercy for Animals says that without national standards or regular inspections, the videos are the best way to alert the public about how animals are treated.

The new law makes it harder for animal rights groups to get the video in the first place. It's now a misdemeanor to lie on an application for a farm job with the intent of harming the business. It's punishable by up to one year in prison and a fine of up to $1,500. State Sen. Joe Seng, who sponsored the bill, says the severity is warranted.