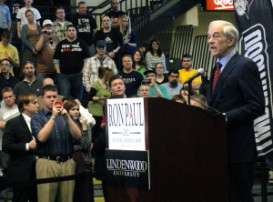 Ron Paul gave an arena full of about 3,000 supporters exactly what they came to hear as the assembled near the City of Hazelwood on Saturday.

The crowd chanted, “Ron Paul! Ron Paul” and “End the Fed” before and during Paul’s address at Lindenwood University’s Robert Hyland Arena.

Paul’s said the U.S. government has ignored the Constitution to the country’s peril.

“It’s liberty that we need and it can be restored, but only if we send individuals to Washington who know the Constitution and obey the Constitution,” Paul told the cheering crowd.

He said the national debt went up a record $200 billion in February, “and that was a short month."

He added, "You can’t solve the problem of national debt by spending more money.”

Paul pledged that if he’s elected president, he would cut the federal budget by $1 trillion.

He said the national debt weakens the dollar and has disastrous effects on the economy, with a true unemployment rate of 20 percent, a rising cost of living and a shrinking middle class.