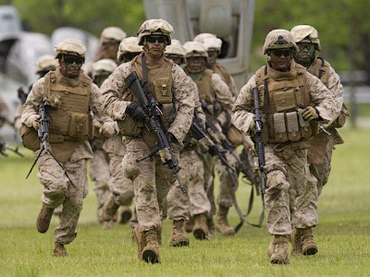 Washington has allegedly opened discussions with allies on possible military intervention in Syria, as foreign ministers from the UN Security Council nations to meet later on Monday to discuss the Syrian conflict.

­According to US Washington Post, some US unnamed officials suggest among the possibilities are directly arming opposition forces, sending troops to guard a humanitarian corridor or “safe zone” for the rebels, or an air assault on Syrian air defenses.

However, the US officially insisted they currently rule out an option of any military involvement in Syria’s internal conflict.

The allies nevertheless remain deeply divided over the scope of any intervention, how and when it would happen, and who would participate, reports the newspaper.

Over the weekend, UN and Arab League envoy Kofi Annan held two meetings with Syrian President Bashar al-Assad. The negotiations failed to reach any tangible results. The Syrian leader rejected a proposal for a dialogue with the opposition and made it clear it would not be open while “armed terrorist groups were still operating in the country.” The former UN chief however said he “feels optimistic.”

The legitimacy of any military options under international law remains highly questionable, with Russia and China having vetoed UN Security Council resolution.