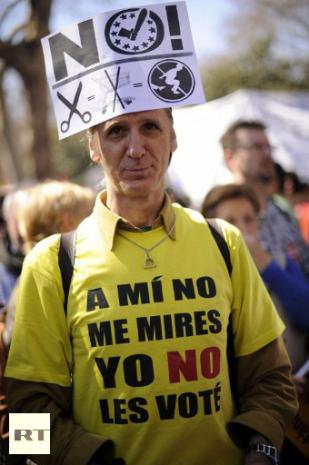 Hundreds of thousands of Spaniards have taken to the streets to protest a labor law reform. The demonstrations organized by labor unions are paving the wave for a nation-wide strike planned for March 29.

­Workers are objecting to what they see as empowering employers at the expense of the employees under the pretext of an anti-crisis austerity policy.

The protest hit some 60 cities and towns across Spain, with the largest reported in Madrid, Barcelona, Seville and Valencia.

The changes to labor legislation have been confirmed by the Spanish parliament Thursday. The reforms affect most worker entitlements, making the dismissal of employees simpler, reducing salaries, increasing working hours and other measures favoring employers.

The government is aiming at revitalizing the economy, which is among those suffering most from the ongoing European recession. Prime Minister Mariano Rajoy wants to prove to investors that Spain will not require a bailout to overcome its problems, unlike Greece, Ireland and Portugal.

Opponents of the reform say it does nothing towards creating new jobs in the country and represents profound social regression. Spain currently has the highest unemployment rate, nearly 23 per cent, among eurozone members.