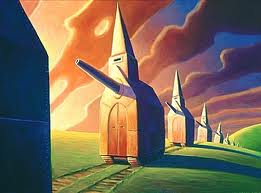 Israel’s American supporters, terrified by claims that a second Holocaust looms for the Jewish state, are crying out for war against Iran.

The entire Republican Party – with the exception of the intrepid Dr. Ron Paul – is consumed by crusading fever against Iran, though many members would be hard-pressed to locate the Islamic Republic on a map.

Republican presidential front-runner Mitt Romney, whose foreign affairs experience is, to put it politely, limited, vows unlimited military support for Israel, with no understanding of the possible consequences. His rivals are even more fulsome in their calls for "jihad" against Iran and its allies.

Israel’s right wing government insists it must attack Iran before the "crazy" Islamic Republic gets nuclear weapons that will be used, it claims, to obliterate Israel.

Netanyahu said nothing about his own nation’s estimated 300 nuclear weapons, or why it needs so many when 16-20 would obliterate the entire Arab world and Iran. There was not a peep from Congress or the media about Mideast nuclear disarmament.

US Writes Belarus into Its Familiar Regime-Change Script

Neil Howe On The Fourth Turning: How Bad Will It Get, How Long Will It Last, & What Comes Next?

Chicago Threatens to Withhold Retirement Benefits From Cops Who Retire Rather than Submit...