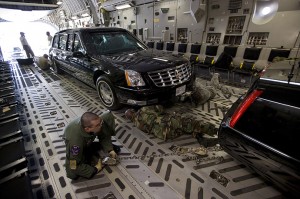 The five medium-capacity C-130s and four heavyweight C-17s will be used to ferry security vehicles, armored limousines and communications gear into cities ahead of Obama’s campaign appearances.

In the months before November, the president is expected to fly into multiple cities per week, and speak at multiple sites per day. On Mar. 8, for example, the president will fly to Richmond, and then drive over to a Rolls-Royce aircraft-parts factory. That evening, he’ll fly down to Houston, Texas.

His wife, Vice President Joe Biden and many of his cabinet secretaries are using the Air Force’s fleet of VIP aircraft to visit more states as the election season speeds up.

The Air Force allocated extra aircraft to support President George W. Bush when he was running for re-election in 2004, she added.