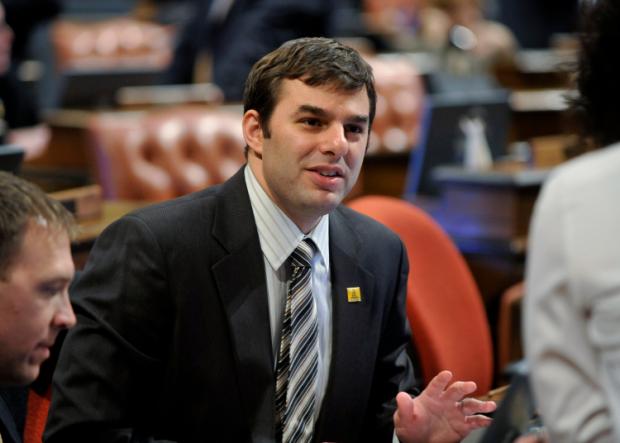 Like Paul, Amash opposed last year’s final debt-reduction deal, along with a bloc of heavily conservative freshmen.
And like Paul, Amash voted along with a bloc of Democrats against extending three provisions of the Patriot Act, including one that permits the continued use of roving wiretaps.
Amash acknowledges that his emphasis on civil liberties — and willingness to vote contrary to party leadership at any time — is rare within his conference and among the conservative freshmen elected in 2010.
But the real difference between himself and other Republicans, he said, is that his staff is more likely to be discussing the Austrian School of economics than ushering in lobbyists and fundraisers for meetings.
“My day-to-day schedule is different from other members’,” Amash said.
“The role that special interest groups play in this office is a lot less than in a typical office. I don’t spend a lot of time over at the Capitol Hill Club raising money in the middle of the day.”
That’s partly because Amash, who represents a safe Grand Rapids-based district, dismisses what he sees as the go-to means for reelection.
“There is this belief that if you don’t spend a significant amount of your time meeting with special interests and PAC fundraisers and the rest, that you’ll be voted out of Congress,” he said. “It’s a cultural thing. And a lot of [Republicans] believe ‘I better do this … We’ve got to stay in the majority, and my seat is very valuable to our party and our agenda.’ I don’t feel any ill will toward them. I don’t think they’re bad because they do it. But I am a firm believer that if you focus on policy the support will come.”
Amash has seen some of the proposals he’s introduced pass — including the measure to ensure that the Pentagon can contract out certain functions to save money.
Others, such as the one to block body-scanning machines in airport security lines or a balanced budget amendment tying federal spending to average annual revenue levels, have not.

9 Comments in Response to Everyone wonders, "Who will eventually replace Ron Paul?" - Meet Rep. Justin Amash of Mich

The usual excuse coming from the "lunatic fringe" is that Ron Paul never wins in his endless bid for the presidency because all voting machines used during elections are always malfunctioning!  What a creep! This kind of National Institute of Health description of "mental illness" is beyond cure!

The term "Unelectable" which has been discussed here for so long, refers to Ron Paul WHO COULD NEVER BE ELECTED as an everlasting candidate for President! It has never been referred to Ron Paul's election to office as a Congressman. This guy posting a comment on the term "unelectable" who calls himself a Chip on his shoulders doesn't even know what we are debating about.  He just butted in like a headless chicken who doesn't know what he is saying or where he is going ... ay, Chihuahua ...Mama mia!

Why is there so much push and fuss about Ron Paul? People are now even wondering where he is. He has been a perennial candidate for president and as usual the announcement to quit has long been videotaped, to be released at a more melodramatic time. The scripted announcement to drop out from the race is about to be published. The right thing to do is ignore him and just wait for the time he falls out as usual. It is so much waste of time, energy and space saying this and that about Ron Paul who is about to exit from the twilight zone into a limbo where he has always been, until the next presidential election comes again and he announces his everlasting bid to run for president, and quit again.  This repeats and repeats in so many years now! It is just a crazy, vicious cycle of wasting time, energy, space and resources which could have been used for other constructive purposes! He is as old as any of the gods of Greek Mythology that profiters who make a business out of him should now top using him.  It is not fair to the man who is a victim of his own destiny.

Yeah, Anonymous, that's why Paul and Amash are public office holders,...because they are sooooooooo unelectable. Feel like an ass? You should.

Of course, most of the good guys - especially the powerful ones - are virtually unelectable. Most of us have known that for a long time. IT'S THE REASON WHY THEY ARE UNELECTABLE THAT IS THE ISSUE. They are unelectable because the bad guys hold the keys to the "back doors" on the electronic voting machines.

We all like to say things like, "I told you so!" It makes us feel good when we are right. It makes us feel important. It might even make us some money when people come to us for advice in the future, since we are the ones who knew it ahead of time.

But the other side is, when we flaunt our, "I know what's gonna happen," and our "I told you so," a little too much, people start to wonder if there isn't some "insider activity" going on behind the scenes. Are the people who are so sure that Ron Paul and others are unelectable, are they working with the behind-the-scenes, back-door voting machine controllers?

To be sure, they will deny it. But any crook denies that he is a crook. So, the question is still there.

I think Charles Manson will be most likely it. Larken Rose is a strong candidate. The only problem is who would vote for them? One is in a can for life, the other is a convicted felon. Anyway, at least Ron Paul and these guys have one thing in common -- "UNELECTABLE". Darn it. I'm serious!

Powell, I'm not saying he is the second coming, or that he is a clone of Paul,...just that he seems very promising. If only more freshman Congressmen were like him.

If the GOP runs s0meone against him in his primary, and if he survives they turn around and endorse his Democrat opponent...then I might believe.

Dr. Francis Collins On The U.S. Funding of the Wuhan Lab And Congressional Oversight

"You Are In Defiance Of Congress": Rand Paul Grills SBA Administrator About Planned Parent