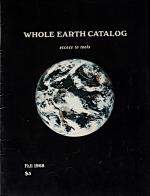 The WHOLE EARTH CATALOG was published regularly from 1968 to 1972, but only intermittently thereafter. During its four years of regular publication, the Catalog earned a reputation, a following, and a National Book Award, the only time a catalog has been so honored.

Standing with one foot firmly in the rugged individualism and back-to-the-land movements of the Sixties counterculture and the other in the nascent global community made possible by the Internet, the WHOLE EARTH CATALOG offered an integrated, complex, challenging, thought-provoking, and comprehensive worldview.

Founder Stewart Brand, in his 1968 CATALOG article, "We are as gods" said, "At a time when the New Left was calling for grass-roots political (i.e., referred) power, Whole Earth eschewed politics and pushed grassroots direct power—tools and skills. At a time when New Age hippies were deploring the intellectual world of arid abstractions, Whole Earth pushed science, intellectual endeavor, and new technology as well as old. As a result, when the most empowering tool of the century came along—personal computers (resisted by the New Left and despised by the New Age)—Whole Earth was in the thick of the development from the beginning."

Stewart attempted to cease publication numerous times, only to see a new catalog, book, or magazine pop up from somewhere. An amazing story, read on.

Bypass VS Blocking Diodes in a Solar Power System

Canadian Hospitals Are No Longer Full With COVID Patients...