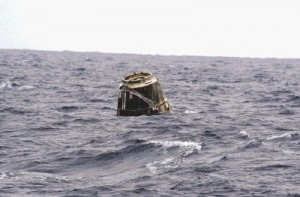 Triumphant from start to finish, the SpaceX Dragon capsule parachuted into the Pacific on Thursday to conclude the first private delivery to the International Space Station and inaugurate NASA’s new approach to exploration.

He said he was a bit surprised to hit such a grand slam.

“You can see so many ways that it could fail and it works and you’re like, ‘Wow, OK, it didn’t fail,’” Musk said, laughing, from his company’s headquarters in Hawthorne, Calif. “I think anyone who’s been involved in the design of a really complicated machine can sympathize with what I’m saying.”

The goal for SpaceX, he told reporters, will be to repeat the success on future flights.