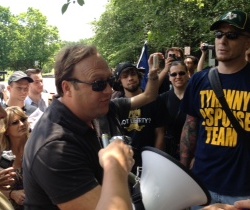 CHANTILLY, Va. – An intense and amplified police presence outside the Westfields Marriott Convention Center greeted the more than 1,000 protestors of the Bilderberg Conference on Day 3 of the secret conclave that gathers global leaders of finance and government.

More than 35 uniformed police officers guarded the primary entrance of the Westfields Marriott, where Bilderberg attendees were quickly shuttled in and out amidst a hail of verbal assaults from protestors, the primary question constantly being asked by those in crowd being why these world leaders were meeting behind closed doors and a wall of armed security.

“We know you are in there, the world knows you are in there, and we know what you are up to,” shouted radio personality Alex Jones into a bullhorn, with a crowd of more than 250 Bilderberger protestors gathered around him, most waving American and Gadsden Flags, many more shouting into bullhorns of their own.

With only a 400-yard partially barbed wire temporary fence separating the Westfields Marriott from the protestors – and a small army of uniformed police walking around the forest buffer surrounding the convention center – Jones organized chants of “The answer to 1984 is 1776,” “USA, USA,” and, “Get out of our Country,” directed squarely at the Bildbergers.

Jones, who hosts the radio program “The Alex Jones Show” and runs the popular news site Infowars.com, spoke to WND while simultaneously streaming his own show live, saying, “You guys are one of the groups trying to bring down the Berlin Wall when it comes to the truth.”

1 Comments in Response to See who's busting Bilderberg wide open

Big shocker that it was held at Mormon owned Marriot, a Masonic global banking cult that launders drug money and has used that to obtain real estate through racketeering ponzi.  So now the racketeering elites have to appropriate how the slaves will be divided and who will live, who shall die.  Sad to say it but Alex Jones is taking orders.  He is way too slow at getting facts out there.  Pretty obvious.  They are bringing back polygamy.  And the women and minorities could organize and do something, but these sick elites have war in their rich blood so not certain there is hope beyond standing up to a blood bath.

Was the Whole Pandemic About the Vaccine?

THE MOGUL AND THE MONSTER: