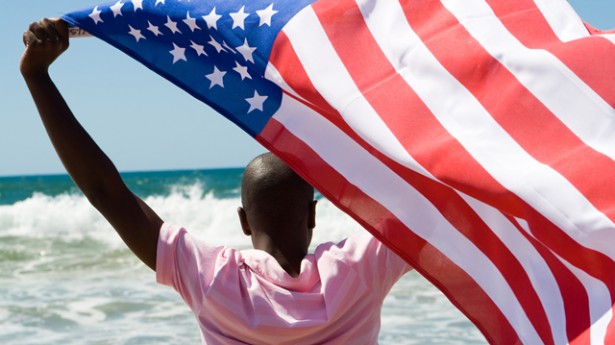 The parents of a 13-year-old boy in Virginia Beach who was suspended for touching the American flag say that their son was unfairly treated because he is black.

Virginia Beach Public Schools Spokesperson Eileen Cox claimed the suspension was ordered after a teacher at Plaza Middle School observed Moses Hinton returning from the bathroom and wiping his hands on the flag because there were no paper towels in the bathroom on May 21, 2012.

Family attorney Wayne Scriven told WAVY that he asked the boy if he had washed his hands before returning from the bathroom.
“He said, ‘I did,’” Scriven recalled. “He said there weren’t any paper towels, so I dried them on my pants before I started walking back.”

Moses Hinton’s mother, Victoria, added that they boy had told her: “Mommy, I was coming up the stairs and I lost my balance and I touched the flag.”

Scriven explained to WTKR that he believes that the suspension was racially motivated because Moses was the only African American male in the school’s gifted program.
“Why react so harshly?” the attorney wondered. “You have a bright, gifted, young black male; it seems to be an attempt to pour ice water on his motivation.”

The flag is a symbol like any other. The "reasonable person's argument" applies here because reverence can become idolatreous worship in cases where this national symbol is treated as something holy. The child accidentially touched the flag. He did not disgrace the country. He is a child for crying out loud with no ill intent involved in the incident.

Virginia is a part of the old Confederacy - Ignorance never dies in the south- they're proud of it !

Should have taken the little so and so out into the feild and shot him ........

Seriously tho , WTF is the world coming to when this sort of thing is allowed ? it's 2012 FGS

Don't take it so hard. If this is the kind of school you are being forced to go to, touch the flag every chance you get. You might never have to go back.

Use your free time to get a good education on your own.