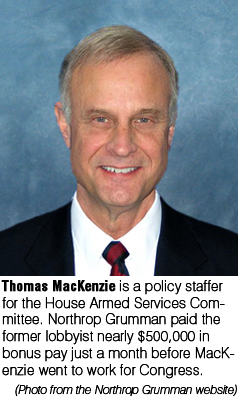 Northrop Grumman, the fourth largest weapons maker in the world, follows the actions of Congress very closely. The F-35, which may cost over $1.45 trillion because of unprecedented cost overruns, an expensive surveillance drone program criticized as unnecessary, and even a new fleet of nuclear bombers are among the Northrop Grumman products that may be in jeopardy as the Pentagon is forced to trim fat from the military budget. But luckily for Northrop Grumman, which made $2.12 billion in profits last year, the firm essentially has a man on the inside of Congress with wide sway over how the government spends money on national defense.

In 2011, after Republicans seized the House of Representatives in a landslide victory, the House Armed Services Committee, which oversees the military, gained a new chairman, Representative Buck McKeon (R-CA). As with most leadership changes, McKeon and his committee hired new professional staff. Thomas MacKenzie, a vice president at Northrop Grumman, was tapped to work for the committee beginning in March of 2011.

There are many examples of lobbyists burrowing into government to work in policy areas that impact their former employers.