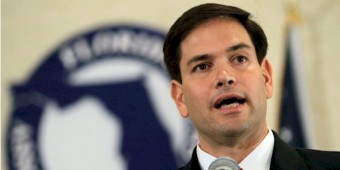 In a generally well-written autobiography being released Tuesday, Sen. Marco Rubio, R-Fla., proclaims his love for his wife and family, his belief that God directs all aspects of his life and his passion for the Miami Dolphins.
But if the arguments presented in dozens of legal cases challenging Barack Obama’s eligibility are correct, “An American Son: A Memoir” also provides the information needed to determine the Florida senator is not a natural-born citizen, a constitutional requirement for the presidency.
On page 24, Rubio writes:
“I was born on May 28, 1971. My sister, Veronica, was born the following year. My mother and father were starting over again as parents in the country they now called home (the U.S.).”
The next paragraph makes clear that Rubio’s parents were both Cuban citizens, not United States citizens, when he was born:
“My parents had lived in America for nearly two decades. It was clear that Cuba had become a thoroughly totalitarian state, and would likely remain so for some time. They had endured many disappointments, and their lives would never be easy. But slowly and surely they made a better life for our family than they had had as children, or could have ever been possible for them in Cuba. Three of their children were born Americans. Mario [the Senator’s older brother, born in Cuba] had naturalized after returning from the army. And in 1975, they, too, became citizens of the United States.”

1 Comments in Response to Rubio autobiography proves he's not eligible for VP?

Sorry the citizenship of anyone's parents have NOTHING to do with citizenship of those born in this nation.  If Rubio was born in the territory or proper of the United States--and that appear not to be in dispute--then he is a citizen by birth.  Period.   Better than the current officeholder of the Presidency or the ass clown who ran against him.

Bitcoin Tumbles After Amazon Denies It Will Accept Crypto This Year