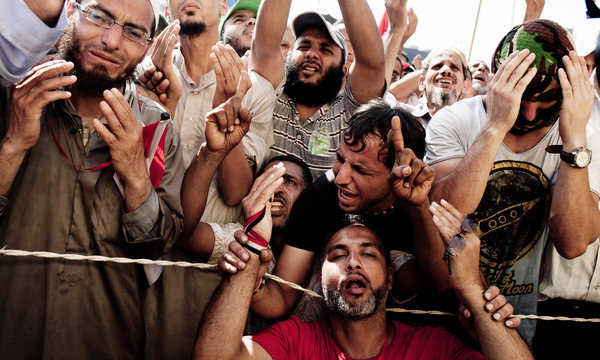 After an hourlong speech in which he detailed dozens of specific inquiries down to the ballot-box level, the chairman of the election commission, Farouk Sultan, announced that Mr. Morsi had won 51.7 percent of the runoff vote completed last weekend. The other candidate, the former general Ahmed Shafik, won 48.3 percent.

In Tahrir Square, where hundreds of thousands had gathered to await the result, the confirmation of Mr. Morsi’s win brought instant, rollicking celebration. Fireworks went up over the crowd, which took up a pulsing, deafening chant: “Morsi! Morsi!”

Mr. Morsi now becomes the first Islamist elected to be head of an Arab state. But his victory is an ambiguous milestone in Egypt’s promised transition to democracy after the ouster 16 months ago of President Hosni Mubarak.
After an election that international monitors called credible, the military-led government has recognized an electoral victory by an opponent of military rule over Mr. Shafik, who promised harmony with the Supreme Council of the Armed Forces. But Mr. Morsi’s recognition as president does little to resolve the larger standoff between the generals and the Brotherhood over the balance of power over the institutions of government and the future constitution. Under the generals’ plan, Mr. Morsi, 60, will assume an office stripped of almost all authority under a military-issued interim constitution.