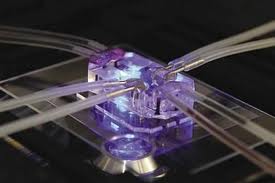 The way pharmaceutical companies test drugs is broken, and Donald Ingber has an idea for how to fix it.

Scientists typically test potential pharmaceuticals on animals, but more often than not, "the predictions from animals fail when a compound is tested in humans," says Ingber, director of Harvard University's Wyss Institute. Performing initial tests on people, of course, is too dangerous. "Our proposed solution is to do studies with human cells," he says, "but not just cells in a dish—cells that exhibit organlike structures and functions."

To achieve this, Ingber and his team are developing a menagerie of microscale devices that replicate the structures and environments of actual human organs more closely than a simple culture dish.

The Wyss Institute's first organ was a breathing lung on a microchip. The transparent, thumb-size device is made of cell-friendly materials and serves as a platform for growing human lung cells. Tiny channels cut through the device. Air and liquid flow through the central channels, where the lung cells are grown, and because the device is flexible, scientists can apply vacuum pressure to the side channels so that the central channels expand and contract—much like human lungs.