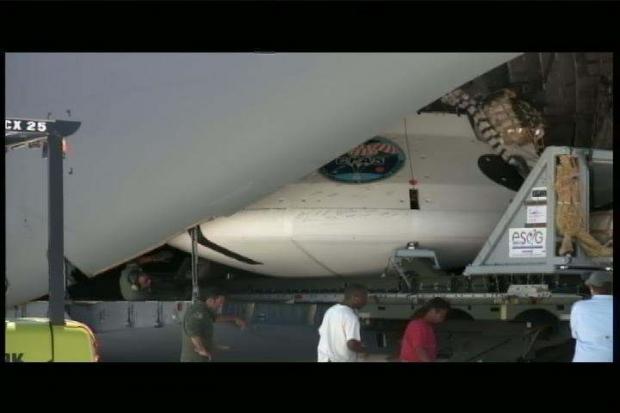 July 18th 2012 at approximately 1200hrs: Some residents of Yuma Arizona witnessed an oversized bell shaped object being transported to an airfield. The object had some exterior damage and police closed intersections before the convoy passed.

On February 29th, 2012, the NASA Capsule Parachute Assembly System (CPAS) team successfully completed an Orion parachute development drop test conducted at the U.S. Army's Yuma Proving Grounds in Yuma, Arizona. This is the third in a series of the most flight-like parachute tests to date with a representative parachute compartment for the Orion spacecraft, and is the first to operate a Parachute Test Vehicle (PTV) representing the Orion Spacecraft capsule.

This particular drop test examined how the wake from the Orion spacecraft would affect the performance of the parachute system. The wake is the disturbance of the air flow behind the vehicle. Parachutes optimally perform in smooth air that allows the proper lift. A wake of choppy air can reduce the parachute inflation performance. This test will be the first conducted with the representative MPCV wake in consideration using the full size vehicle and complete system.

The test hardware was extracted from a C-17 aircraft supported by the U.S. Air Force at an altitude of 25,000 feet above the U.S. Army's Yuma Proving Grounds. After reaching test conditions under programmer parachutes, the drogue chutes were deployed between 15,000 and 20,000 feet. After reaching steady state, the drogues were cut away and three pilot parachutes were deployed pulling out the three main parachutes. There were 17 parachutes deployed during this test; 9 were test technique related and 8 were Orion system parachutes.

Since 2007, the Orion program has conducted a vigorous parachute air and ground test program and provided the chutes for NASA's successful pad abort test in 2010. All of the tests build an understanding of the chutes technical performance for eventual human rated certification.

Building a Tiny House in Arizona - Is smaller better here in the desert?