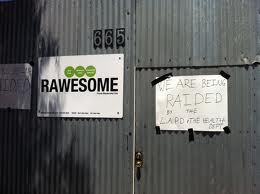 Documents and testimony obtained by NaturalNews allege the following: The Rawesome Foods armed “raw milk raids” and prosecution of James Stewart and Sharon Palmer were carried out in part by law-breaking private citizens pretending to be lawful government authorities. Those individuals — who have been operating under false labels such as “district attorney” or “LAPD officer” — may conceivably be liable for millions of dollars in civil and criminal damages for their actions which technically may be described as:
• The armed robbery of Rawesome Foods, including theft of cash
• Willful destruction of private property
• Criminal kidnapping of James Stewart
• Violation of the civil rights of James Stewart
… and other crimes to be described later.

brag, you forgot to tell me what a tax-feeders boot tastes like.

Brag, only a few of them in the dark side who are against us, will never win in the altar of public opinion because we are the "light" that cast their black shadows away for the public to see who really they are.Get going, and keep up the pace.

To Ed Martin … May I speak for JV? He is too civilized for you.

Speaking about how it tastes …you mean like how did it taste when that police truncheon landed in your mouth? Did it taste like UNI ? It’s hard wood, man … with a spice of sharp metals around it for that taste at the back of your palate you will never forget as long as you live.

Tell them … tell them also about your waterboarding treatment and caterpillar meals security agents prepared for you every day before your release from Guantanamo. Tell them how you lost your manhood when they took away one of your balls. Now, be careful for what you say… you are still under parole … you might lose the other one too.

Don’t forget, that’s the last one you have. You could end up with a female voice when they turn you into Eunuch. With one ball left, you already sounded like an ineffectual man who lost his manhood.

You can imagine what the Military can do to people like you. They are going to do to you what they have done to you, all over again, and to the other captured hardened terrorists like you … turn you into a harmless Elf, gentle and meek as a woman so that you are no longer a threat to national security.

THEY MASSAGE YOU FIRST BEFORE THEY PULL THE RUG UNDER YOUR FEET!

Be very careful with this false propaganda headline coming from an anti-Government website.

Read the text carefully and you will find out how this case is twisted in defense of a raw milk felon who has been arrested for violating the law – it was perverted for the purpose of turning the ire of the public on the LAPD that conducted the raid.

This notorious anti-Government writer Mike Adam alleged that the LA official Michelle LeCavalier who signed the search warrant and arrest of the raw milk peddler who violated the FDA and other laws, has no signed oath of office when she authorized the raid.

This deviant reporter presented as evidence, the letter from the County of Los Angeles Public Health in response to a letter-inquiry. This response-letter states as follows: "In your letter you expressed concern over the absence of a public record regarding the Oath of Office for Environmental Health Specialist Michelle LeCavalier. Your letter also suggests Ms. LeCavalier should not have received compensation unless an oath is taken per the California Government Code section 1367.

"Department of Public Health procedures require the appointment of Deputy Health Officer and oath of office to be given at the time of badge issuance. However, a review of Department policies and practices indicate a need for improvement in the recording process and corrective measures have been initiated."

This is the only core evidence presented. Did you read any part of this letter that says Michelle LeCavalier has no signed oath of office when she authorized the raid?

Based on this letter, this depraved prisonplanet.com writer made his own perverse conclusion that Cavalier has no signed oath of office!

In response to further inquiry that followed later on, the Los Angeles Public Health Department released a statement on procedural requirements to be strictly observed and followed that oath of office of public officials engaged in law enforcement cannot be publicly disclosed for security reason.

Just because in this particular case public disclosure is prohibited does not mean there was no signed oath of office filed on record when the badge was issued to law enforcement officials concerned.

This errant reporter justified his gobbledygook in falsifying reports by saying "Because we believe in upholding the law. We’ve seen extreme and utterly unjustifiable violations of the law…"

What about the raw milk felon who violated the FDA law and other laws that this poppycock prisonplanet.com reporter was defending? Was this felon’s violation of the law the only violation that in the mind of this anti-Government writer is "justifiable" and the rest of law violations are not?

Be careful and take note how they massage your head first before they pull the rug under your feet.

If you want protection, don't hesitate to reach me by posting your comments.