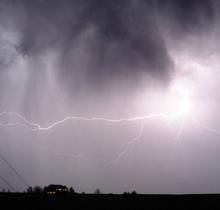 Gary Harrington of Eagle Point, Ore., says he plans to appeal his conviction in Jackson County (Ore.) Circuit Court on nine misdemeanor charges under a 1925 law for having what state water managers called “three illegal reservoirs” on his property – and for filling the reservoirs with rainwater and snow runoff.

“The government is bullying,” Harrington told CNSNews.com in an interview Thursday.

“They’ve just gotten to be big bullies and if you just lay over and die and give up, that just makes them bigger bullies. So, we as Americans, we need to stand on our constitutional rights, on our rights as citizens and hang tough. This is a good country, we’ll prevail,” he said.

The court has given Harrington two weeks to report to the Jackson County Jail to begin serving his sentence.

If nothing else, sue Government for letting their water trespass on your property. Bill them for the ponds you had to build just to keep their water from eroding your land. Bill them for the job of collecting the water that you did so that they had water to use on forest fires, etc.. Bill them for water storage. Bill them for not coming and removing the water from your land in a timely manner. Sue them for abandonment of the water all these years. Bill them for future damage the future water will do to your land. Make them take out a "Reclamation of Land" insurance policy like the mining companies do, to reclaim the land that they mess up by their mining. Make each item you can think of to be a separate law suit. Find friends and neighbors in a similar position, and get them to bill or sue Government, as well. You get the picture.