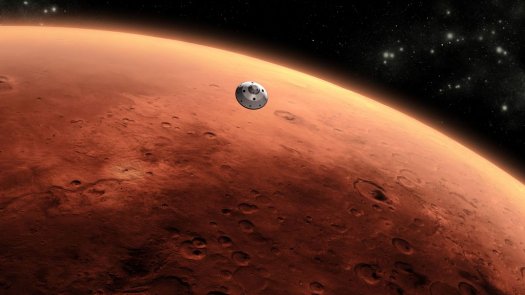 It's finally landing day -- or so everyone here at the Jet Propulsion Laboratory hopes. After eight months of travel, the Mars rover Curiosity is just hours from phoning home to announce its arrival, scheduled for 1:31 a.m. Monday on the East Coast and 10:31 p.m. Sunday here in California. It might not call right away, however -- or at least we may not be able to hear it if it does. But silence from the Red Planet does not mean all is lost.

On its final approach today, the Mars Science Laboratory spacecraft carrying the rover will continue to communicate directly with Earth, but this only lasts through the first part of its "seven minutes of terror." As the spacecraft's supersonic parachute deploys, Earth sets below the Mars horizon, cutting off contact through the Deep Space Network. The Mars Odyssey orbiter will be flying right overhead, however, and serving as a vent pipe (to use NASA terminology) to funnel data back to Earth. "That's what we're going to be glued to," said Steve Sell of Curiosity's Entry, Descent and Landing (EDL) team.

But there's a catch: Curiosity is landing in a crater. Craters have walls. And Odyssey is not very high on the horizon on this pass, so there's a chance the rocky terrain will cause it to miss the landing signals, too. In that case, the mood at JPL will grow even more tense, as everyone waits for the next flyover. This will be at 12:30 a.m. Pacific time Monday, when Odyssey makes its next "overflight" at Gale Crater.

This is a lot of time zones to keep straight, not to mention the time on Mars itself. Curiosity lands at 3:19 p.m. local Mars solar time, in case you were wondering. To figure out what time it will be where you are, go here to check out a handy chart produced by the Mars Science Laboratory team.

'Ring of fire' eclipse 2021: When, where and how to see the annular solar eclipse on June 10

Why China Could Vanquish The US In New Space Race