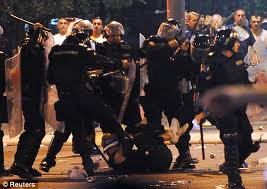 The good news – or Lopez initially thought – was that the assault took place less than ten yards away from the 1st Police Precinct station.

Bruised and bloodied, Lopez attempted to enter the station to file a complaint, only to be met by Officer Aaron Hanson, who angrily told him to leave. As Lopez tried to explain what had just happened to him, two of Hanson’s comrades "came out, put their gloves on and were yelling at me, telling me to get out," he later recalled.

This was the second time that evening that the intrepid Officer Hanson of the Minneapolis PD had consciously refused to come to the aid of Lopez and his friends.

Lopez had come to the aid of his friend Joshua Rivera, whose wife Magdalena was being harassed and intimidated by a pack of street thugs. While trying to escort Magdalena to safety, he was blind-sided by several of the goons. When Rivera came to Lopez’s aid, he was swarmed and beaten unconscious. Magdalena ran to the police station to seek help. She was able to get through the front door, but found that the inner door was locked. She managed to get Hanson’s attention and frantically gestured for him to come out, "but he just shrugged his shoulders," she recounted.