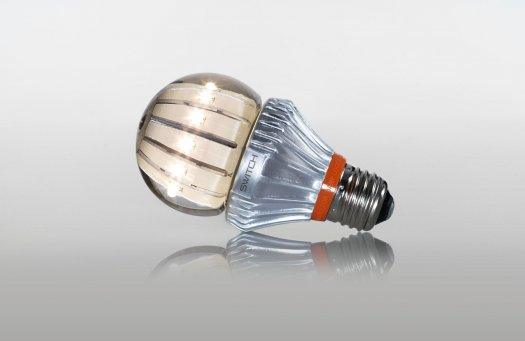 The ice cream cone-shaped fluorescent light bulb was supposed to be the lamp of the future, producing just as much light as the century-old Edison incandescent at a fraction of the energy. But CFLs look terrible, enveloping rooms in an unfriendly bluish hue. LED lamps are the next future of lighting, but they have their own obstacles to overcome, including sensitive electronics that can burn out when they get warm. SWITCH, the first liquid-cooled light bulb, aims to solve that issue and light up your house with the comfortable yellow glow of the incandescent. WHAT'S NEW

Right out of the box, the SWITCH60 feels impressive, like a Cadillac version of a regular bulb. It has the globed shape of the 60-watts I used to buy before switching to CFLs, but it's way, way heavier -- the weight is the first indication that it's a piece of technology, not just a thin piece of glass you screw into a lamp and forget. On my kitchen scale, it weighed in at 9.8 ounces, about as much as a typical volleyball.

The weight is behind this bulb's secret -- it's full of liquid silicone, which dissipates heat from the 10 LEDs (12 LEDs for the 100-watt version). Warmer silicone moves toward the glass exterior, where heat dissipates into the air; as it cools, the silicone drops back toward the bulb's heart. Think of a lava lamp; this works basically the same way, said Dave Horn, chief technology officer at SWITCH. You just can't see the gloopy circulation.