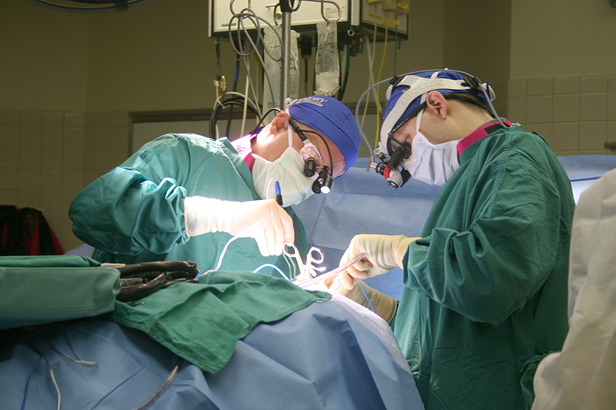 This week, surgeons at Emory University in Atlanta implanted a second dose of neural cells into a patient's spinal cord, part of an experimental treatment aimed at slowing the progression of ALS, or Lou Gehrig's disease. The patient, Ted Harada, is the third person this summer to receive a second dose as part of the trial. The cells are produced by a Rockland, Maryland-based company called Neuralstem that isolates stem cells from the brain and spinal cord of aborted fetuses. The company is also targeting other major central nervous system conditions with its cell therapy platform, including spinal cord injury, ischemic spastic paraplegia, chronic stroke, and brain cancer.

ALS gradually destroys the connections between the spinal cord and motor neurons, eventually robbing patients of all ability to move. The hope is that the cells injected into the spinal cord will provide support, perhaps by releasing growth factors, and prevent motor neurons from dying. "They nurture the dying motor neurons back to health or make them healthier and slow down the degenerative process," says Richard Garr, CEO of Neuralstem.

"We have found that the procedure is extremely safe," says Eva Feldman, a neurologist at the University of Michigan and the lead investigator of the trial. "In a subset of patients, we seem to see that the disease is no longer progressing," but it is too early to know if the result from that small number of patients is meaningful, she says.