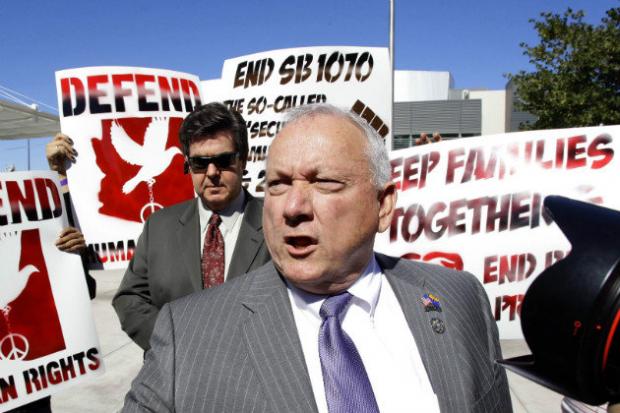 Immigration hardliner Russell Pearce’s burning desire to return to office in Arizona got doused with cold water on Tuesday night when he lost the Republican primary for state Senate to a moderate businessman who took a softer tone on immigration.

It was the second time in less than a year that Pearce, a tea party favorite who was once one of the most powerful politicians in Arizona, was put to bed by a moderate and it marked the end of a disastrous attempt to regain his standing in state politics.

His campaign was marred by typos, fundraising problems, an uproar that involved him questioning the bravery of the Colorado massacre victims and a murder-suicide carried out by a former friend.

When the voting was done, Bob Worsley, the wealthy founder of the in-flight shopping company SkyMall, was on top 56 percent to 44 percent, and journalists were being kicked out of Pearce’s election night party in Mesa, Ariz.

“This is the same Russell Pearce who said he’d never lose a primary,” political organizer Randy Parraz told the Arizona Republic on Tuesday. “He misjudged the fact that he was no longer a conservative Republican — he was an extreme tea party Republican. There’s no comeback for Russell Pearce — he’s done.”

Parraz organized a successful recall of Pearce in November. At the time, Pearce was the state Senate president and arguably a more powerful politician than even Gov. Jan Brewer (R). But fueled by anger over some of Pearce’s more outrageous actions, voters threw him out midway through his term in favor of moderate Republican Jerry Lewis.

This time around, Pearce hoped things would be different. Redrawn political districts meant he wouldn’t have to face Lewis again. He also tried to rebrand himself as a nice guy to counter the reputation he gained as a flame-throwing immigration hawk after sponsoring the state’s harsh immigration law known as SB 1070. His campaign materials showed him smiling and holding a baby.

But the trouble came early when news broke in May that an Arizona man had shot and killed four people in a suburban house outside of Phoenix before killing himself. The man turned out to be JT Ready, a border vigilante and former confidant of Pearce. The two had a falling out years ago after Ready’s white supremacist views became public, but it left Pearce in a position of having to answer questions about the relationship in the middle of his campaign.

“When we first met JT he was fresh out of the Marine Corp and seemed like a decent person,” Pearce said at the time, adding that the two eventually parted ways. “He was angry with me and stayed angry with me, and it has been several years since I have had reason to speak with JT.”