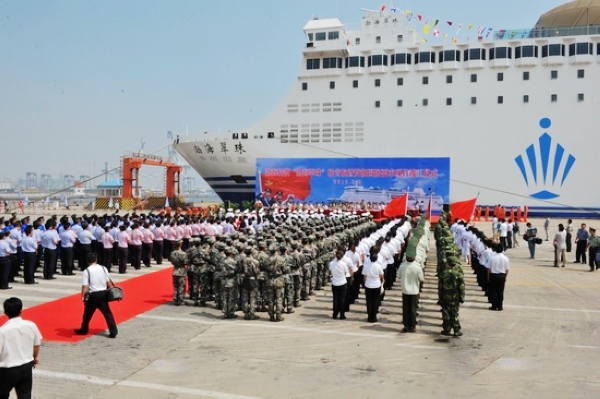 The media freaked out about China’s crappy aircraft carrier and hyperventilated over the J-20 stealth fighter. But China’s newest addition to its military is more subtle, and stylish. It’s a 36,000-ton pleasure boat capable of disgorging thousands of troops and hundreds of vehicles held inside its belly.

That would be the Bahai Sea Green Pearl, a 36,000-ton ferry and cruise ship commissioned in August at Yantai Port in China’s northeastern Shandong Province. At heart a vessel for pleasure and civilian transport, the ship is intended to normally ferry cars and passengers across the Yellow Sea. But when needed by the People’s Liberation Army, the Green Pearl can double as a troop carrier. During its launching ceremony and demonstration on Aug. 8, PLA troops could be seen loading dozens of tanks, artillery pieces and armored vehicles on board.

Photos from Chinese state television posted to the China Defense Blog show some of the action, including what looks like fully loaded soldiers running through a corridor. Tanks and artillery pieces are also seen inside one of the ship’s three vehicle compartments. How they got there: via the ship’s roll-on/roll-off (or ro-ro) ramp on its stern.

China also has three more of the vessels under construction, which Zhang Wei, chief of the PLA’s Military Transportation Department under the PLA General Logistics Department, said is a “new leap in our military use of civilian vessels to improve the strategic projection.” The Green Pearl reportedly has room for more than 2,000 people and 300 cars. It’s even got a helicopter pad.