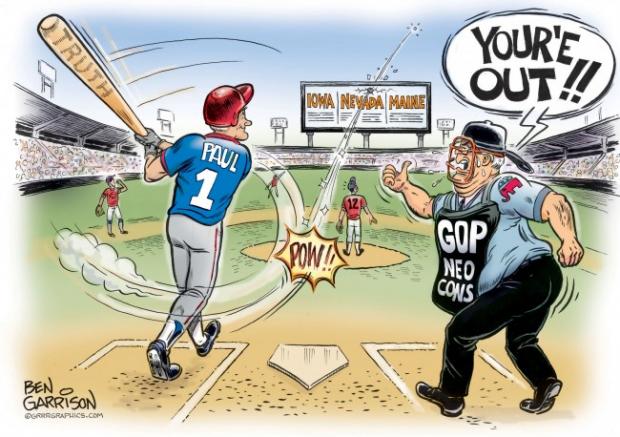 The Grand Old Party produced a scripted appeal to the faithful. The 2012 Republican Party convention in Tampa, designed to sell a filtered image of a country club version of conservatism, begs the historic substance of a traditional embodiment of true timeless values. Hitting a range of obligatory themes is not equivalent to standing for the principles of a constitutional republic. Appealing to the estranged elements of the GOP needs more than words to restore faith and hope. Reasoned policy stands require a refutation of the failure of the Neoconservative agenda. So do not be duped by the language in the platform.

The indomitable Phyllis Schlafly loves the planks, in the article: Republican Party platform best yet.

“It rejects a long list of United Nations treaties, including the treaty on women’s rights, the treaty on the rights of the child, the treaty on persons with disabilities, the arms trade treaty and the Law of the Sea treaty. The platform also rejects Agenda 21, including its proposal for a global tax and various U.N. declarations on the environment.

Altogether, the 2012 Republican Platform is an excellent document written by grass-roots conservatives. It is a true reflection of American values.”

Now how can any red blooded conservative disagree with a political party that rejects the globalism of the United Nations? Well, our distinguished champion at the Eagle Forum engages in wishful thinking, if she believes that the platform is anything more than tomorrows fish wrapper paper.

For a concise analysis of the irrelevance of the planks in the platform, view the John Nichols: Mitt Romney Versus the Tea Party video. In politics, deeds count, while rhetoric blows away with the wind.

Judge a campaign by the political handlers and their records. Examine the viewpoints that the political endorsers are committed to their core. The notion expressed by the New York Times in Platform’s Sharp Turn to Right Has Conservatives Cheering may give temporary joy, but the ugly underbelly of the NeoCon purity sect is at work to purge the party of the residual of real conservatives.

You can trust such social outcasts as the John Birch Society, when their columnist, Joe Wolverton II reveals what really transpired at the convention in the article, RNC, Romney Combine to Quiet Ron Paul and his Delegates.

I don't know what anyone else is doing, but I am going to follow my conscience . No more " lessor  of two evils". I will write in Ron Paul. God Bless America, and all my friends and neighbors. Let's stick together and pray for OUR COUNTRY!