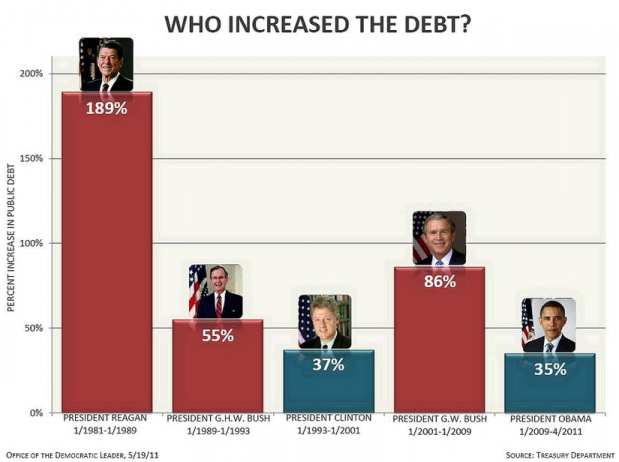 The chart, which, notably, was produced by the Office Of The Democratic Leader, shows the amount the U.S. debt expanded under each President since Reagan. It shows that the debt increased far more on a percentage basis under Republican Presidents Reagan, Bush, and Bush than under Democratic Presidents Clinton and Obama.

However, for several reasons, the chart is not particularly meaningful, as the myth-busters at Snopes.com make clear:

Two of the Republican Presidents--Reagan and Bush 2--had two terms, and in an economy that is running at a deficit, you'll accumulate more debt over two terms than one. Importantly, of course, Democratic President Clinton had two terms, and he accumulated the least debt of any of these Presidents. Incoming Presidents inherit the spending and taxing policies of their predecessors, as well as their economies. So a lot of what happens early in Presidential terms should be laid at the feet of the predecessor. Congress plays a big role in spending and debt creation. Debt analyses are most relevant on a debt-to-GDP basis. This chart shows the change in debt in absolute dollars. Percentage changes are less meaningful when dealing with small numbers than they are with big numbers. Bush 2. The chart only goes through the end of 2010.

So, yes, the chart is basically accurate, but it's not particularly meaningful.

1 Comments in Response to This Chart Showing That Most Debt Growth Came Under Republican Presidents Is Accurate, But...

Who said the R's were by & large, fiscally conservative any way? :-) They did? BIG WHOOP!! They probably say they never lie, as well. Then there are the Dems, the R mentors...

I have a feeling that the dollar amounts were left off on purpose. Percentages only tell part of the story. If the AMOUNTS of money the debt was increased by each prez we would have a very different outlook. We need to know "percent of what amount".

Some one once said  "If figures don't lie, then why do liars figure?" I got that from a Texas man, Harold Bell, that I knew in Phoenix in the 70s. . Also became a Cowboys fan because of him.