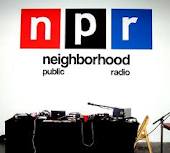 In the 21st century that voice has disappeared, which was the intention of the George W. Bush regime. Bush put a Republican woman in charge who made it clear to NPR producers and show hosts that the federal part of their funding was at risk.

Money often over-rules principle, and when corporations added their really big money NPR collapsed. Today the local stations still pretend to be funded by listeners, but if you have noticed, as I have, there are now a large number of corporate advertisements, disguised in the traditional terms “with support from…” If you are not listening to classical music, you are listening to corporate advertisements.

Today the entire “mainstream media” is closed to truth-tellers. The US media is Washington’s propaganda ministry. The US media has only one function—to lie for Washington.

Rand Paul on New Mask Mandates: 'It Makes No Sense, and the Science Doesn't Support It'