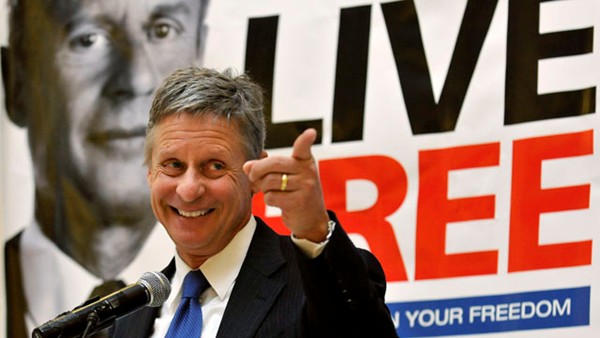 Libertarian Presidential candidate Gary Johnson's pilgrimage to Tampa to seek more small government, big liberty adherents and additional publicity is paying off, at least with a subset of November voters.

Johnson recently spoke at P.A.U.L. (now signifying People Awakening and Uniting for Liberty) Festival speaking directly to Ron Paul supporters about his vision and quest for the presidency in a bid to lure them to his side.

This came at the same time as torrents of bad news about Ron Paul's vestigial presidential bid rained on both his fan's parade and their festival. Nevertheless, despite the risky timing, Johnson's honest, kind and respectful demeanor appeared to leave more than a few people wondering why they were angry about his bid in the first place.

As Johnson regularly recounts, in 2008, Ron Paul asked for his support and he "readily gave it," speaking for him at an event in Minnesota. And when asked in the Republican debates that on state he would choose as his VP choice, he quickly stated "Dr Ron Paul."

Nevertheless, Ron Paul fans, and by all accounts, Ron Paul himself, did not appreciate competition for the hearts and minds of liberty voters. While Gary Johnson has been ebullient in his support for Ron Paul and entered the race believing he wasn't going to run, the reception from the Paul campaign has been nothing short of frigid.

Jesse Benton, Paul's campaign spokesman said early on that Paul would not back Johnson. While the largest reason for this is Paul's fealty to the GOP and his aspirations of a Rand Paul presidency, Paul was also apparently personally upset by Johnson's entrance into the race.   Nonetheless, there is no doubt that Johnson has taken this in the same gentlemanly fashion Ron Paul has accepted his lot within the GOP Convention. Better, in fact. And that showed in his effusive pro-Ron Paul P.A.U.L. Fest speech and follow up internet advertisement that does nothing but pay homage to Paul.

There is no doubt that the GOP's tepid embrace of a few token Ron Paul planks while simultaneously denying him his last opportunity to speak has a sitting Congressman is not sitting well with his supporters.

Mitt Romney remains as unpopular as ever with Paul fans, and his choice of Paul Ryan (fiscally conservative in speech, neo-con in deed) didn't have the desired effect of wooing liberty voters.  Anecdotal evidence from the internet shows that many Paul fans are taking serious turns from their former direction.

GJ is, by definition, not a libertarian.  If he is, then everybody is because everyone professes to want minimal central government.

Wikipedia says, "According to the U.S. Libertarian Party, libertarianism is the advocacy of a government that is funded voluntarily and limited to protecting individuals from coercion and violence."

GJ is running in the Libertarian Party, no?  But yet, I think he's for involuntary funding.  Correct me if you think I'm wrong.  Thanks!