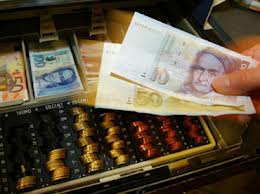 * UBS: Hundreds of billions of francs to leave Swiss banks

* UBS still sees reason for clients to bank in Switzerland

Juerg Zeltner, head of UBS wealth management, reiterated an estimate he gave in May that Switzerland's biggest bank could see outflows of 12-30 billion Swiss francs ($12.8-31.9 billion) from total European assets under management of over 300 billion.

"As a consequence of the realignment of the financial centre and the planned withholding tax, we assume that a total of hundreds of billions of francs will flow out of Switzerland," he told the Schweizer Bank magazine in an interview on Monday.