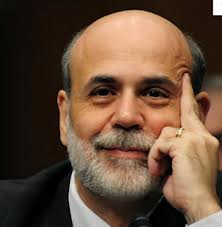 Analogizing from the sleight-of-hand tricks of magicians to the confidence-based efforts of the world's central bankers, Brent Johnson of Santiago Capital provides at once an entertaining and also devastatingly simple explanation of what these guys are up to. As he notes, in deference to The Usual Suspects, "the greatest trick central bankers ever pulled was convincing the world that they work for the public and not for the banks." Comprehending the financial repression and inflation that is occurring - and knowing where to look to see the truth (and how to protect your assets) - is critical in not becoming the shill in Bernanke, Draghi et al.'s global game of Three-Card-Monte.

I certainly love my job, this power of mind-reading I spent years learning in the school of psychiatry. It taught me to see how the mind works.

Here's the thing: These two "illiterate" guys down below (I do not literally mean down there from the gutter) are trying very hard to look like Dr. Bernanke; they are even attempting to outsmart him by talking "loco-economics" (crazy economics). I think they should go to school for the first time and stop being "illiterate". They should end with up with a healthy rather than a broken mind.

Because they are desperate to be looked at as economists like how people look at and admire Dr. Bernanke as a top-rated economist of the land, they should get their Ph.D. in Economics, otherwise they should stop embarrassing themselves (eroding their self-respect) by holding their tongue, and silence themselves in peace forever!

That multiple perceptions of self-enmeshed delusion of grandeur are going to get worse and worse over time that could develop into multiple-personalities, a mental problem much harder to cure.

Well said, Panot. Illiterates think Dr. Bernanke who has a Ph.D. in Economics is soooooo smart the only economics they understand out of him is how they understand Houdini, the Magician, who make their money disappears. Oh, boy, how they suffer a broken heart as if they have a stroke ... they end up with a vocal disability -- a slurred speech and a broken English... hah .. ha, ha, heh, he, he...

You are right again, JV ... See how they go banana?

Since I just joined in, I like the intellectual skill of this guy JV. Who is he? He talks like a seasoned Economist! I like to hear more from him.

This anti-Fed guy in the video from the zerohedge.com blog is trying to pull a Houdini act and passed it as what’s happening in the U.S. economy. How his “magic” was so crudely bucolic and countrified or ignorantly pastoral that I feel embarrass to analyze for the benefit of our reading public. He has all these mumbo-jumbo graphs that do not make any economic sense at all. He has a hard time trying to connect the "Bankers" to Houdini who makes things disappears like magic, and at the same time the "Bankers" make so much money appears also like magic, and presto! a WEALTHY nation, which is now the United States of America coming out of the rabbit hat.

And the gullible spectators think that these contradictory confusions that are impossible to explain or rationalize to make the layman understands, are the workings of the SUPERNATURAL … and look … how they go religiously banana!

This is the problem when those who are ignorant of how the economy works try to be as smart as Dr. Ben Bernanke who has a Ph.D. in Economics, and as Chairman of the Federal Reserves is trying to save the world from economic collapse -- the truth which ECONOMIC ILLITERATES like this guy in the video can only speculate but can never, and will never, ever know.

Yes, Pure Trust, the big banking cartels are the heart of modern Babylon, and Lucifer is the brains.  The "Beast" system wants us hungry, worried, fearful, confused, angry, hateful, desperate, and distracted. Survival is a basic instinct of all creatures great and small. When they cannot survive within the law, they will survive outside the law. The kindly church lady, the good neighbor, the timid little fellow, can all become a danger under sufficient duress. Major duress is headed our way! Peace and love in the Truth, the Way, and the Life of Christ has never been more important. Resistance to tyrants is obedience to God.

What would you do for money, especially if you really needed it, say, to feed your starving children? How many people would you murder for money if you could get away with it safely? How much theft or vandalism? How much prostitution would you engage in?

Consider the following from the Bible, from Revelation 18. The Babylon of Revelation is none other than the world money and banking system. Read the quote, below, and see. When it finally falls, it will fall fast... in one hour.

11 “The merchants of the earth will weep and mourn over her because no one buys their cargoes any more— 12 cargoes of gold, silver, precious stones and pearls; fine linen, purple, silk and scarlet cloth; every sort of citron wood, and articles of every kind made of ivory, costly wood, bronze, iron and marble; 13 cargoes of cinnamon and spice, of incense, myrrh and frankincense, of wine and olive oil, of fine flour and wheat; cattle and sheep; horses and carriages; and bodies and souls of men.

14 “They will say, ‘The fruit you longed for is gone from you. All your riches and splendor have vanished, never to be recovered.’ 15 The merchants who sold these things and gained their wealth from her will stand far off, terrified at her torment. They will weep and mourn 16 and cry out:

“‘Woe! Woe, O great city,
dressed in fine linen, purple and scarlet,
and glittering with gold, precious stones and pearls!
17 In one hour such great wealth has been brought to ruin!’

“Every sea captain, and all who travel by ship, the sailors, and all who earn their living from the sea, will stand far off. 18 When they see the smoke of her burning, they will exclaim, ‘Was there ever a city like this great city?’ 19 They will throw dust on their heads, and with weeping and mourning cry out:

“‘Woe! Woe, O great city,
where all who had ships on the sea
became rich through her wealth!
In one hour she has been brought to ruin!
20 Rejoice over her, O heaven!
Rejoice, saints and apostles and prophets!
God has judged her for the way she treated you.’”

Who knows? Maybe 9/11 was the symbol that these things were about to start happening. How far along are they now?

Maybe 9/11 was the symbol that it was already finished, except for the cleanup, that is.