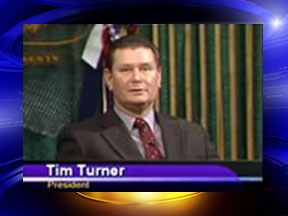 The self-proclaimed president of the 'Republic of the united states of America' returns to federal court for a detention hearing today.

Federal prosecutors in the U.S. Attorney's office request to hold Tim Turner until he goes to trial for felony counts, including conspiracy to defraud the federal government.

The 56 year old Turner is an Ozark resident and presides over the largest and most organized group of sovereign citizens in the country, which is subsequently on the Southern Poverty Law Center's watch list.

Following Turner's arrest on September 18th, the Republic for the united states of America released a statement, citing "The unchartered Municipal Corporation (UNITED STATES) has taken a desperate action through their corporate policies which are clearly outside constitutional governance.  This dishonorable act will reveal to Americans that the United States must return to the Constitution and the rule of law."

The first detention hearing was scheduled for last Monday, however Turner's legal counsel did not show.  The court granted Turner one week to retain counsel, or move forward with a court-appointed attorney.

Watch the complete report on this story tonight on WSFA 12 News.

His council didn't show, because when they found out who the council was going to be, he was arrested too!