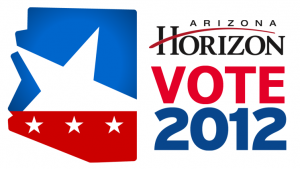 The two rivals also traded barbs over earmarks -- Flake's signature issue -- and bringing home federal dollars to Arizona, as well as other topics.

The Arizona race has become one of the most closely watched in the nation and could help decide which party controls the Senate.

Carmona, a former U.S. surgeon general from Tucson running as a Democrat, and Flake, a six-term Republican congressman from Mesa, sparred twice Wednesday: in the afternoon before The Arizona Republic's editorial board and in the evening during an hourlong live debate televised on the Channel 8 (KAET) "Arizona Horizon" program. Libertarian rival Marc Victor joined Carmona and Flake for the KAET show.

In both appearances, Carmona repeatedly pushed back hard against the Republican image of him as a rubber stamp for Obama's Democratic agenda, refusing to defend the Obama administration or Senate Majority Leader Harry Reid, D-Nev. Obama and Reid are among the senior Democrats who called Carmona last year to encourage him to run for the retiring three-term GOP Sen. Jon Kyl's seat.

Carmona told both The Republic editorial board and KAET viewers that he would not have voted for the health-care law, known as the Affordable Care Act, had he been in the Senate in 2010.

"In its current configuration -- no," Carmona said during the Republic session. "If I was there, and I've said it repeatedly, I would have told the president: 'It's 25,000 pages of complex stuff. It's confusing. People are not going to understand it. We should work with the Republicans, roll it out incrementally over a several-year period and let the people get educated about it so that they're not scared.' "

Flake, who opposed the health-care law, appeared caught off-guard by Carmona's announcement that he would not have voted for the bill.

The two joint appearances gave voters their first real glimpses into the Carmona-vs.-Flake rivalry for the seat Kyl is vacating.

On Wednesday night, Carmona was planning to appear at a get-out-the-vote rally in Tempe headlined by former President Bill Clinton.

I had to laugh when I saw that above the fold headline in Arizona Repulsive this morning.  Ignore the libertarian.  Crop the photo.  Pay no attention to that man at the table, here are your choices.