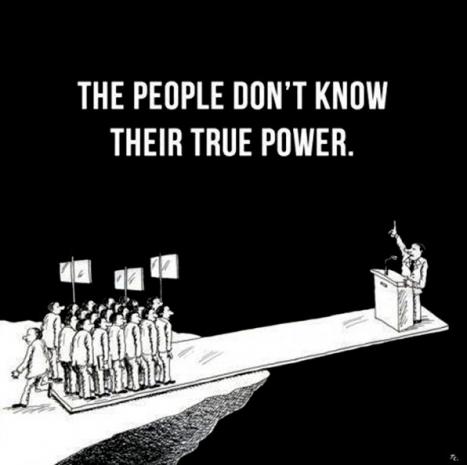 At this Democracy Unplugged (http://www.democracyunplugged.net/) forum for alternative parties the Vote for Nobody Campaign (http://www.anti-politics.ws/) participated for the first time. While the other presidential candidate's representatives talked about their vision of what the government should be and do, Jim Babb extolled the virtues of nonvoting and a stateless society. Please also visit the Boycott the 2012 Presidential Election website (http://electionboycott2012.org/), a group on the left with a similar goal for this election.

So, we have groups of ignorant people - like in the ghetto - who don't vote because they are too dumb to vote.

Then, we find those who are a little smarter - at least they think a little - and they vote.

Next, we have the political activists... you know, the ones who holler and wave the signs, "Vote, Vote, VOTE, for my candidate."

We also have the very smart activists, the ones who say, "It's all rigged. Why vote at all?"

Then we have the SUPER-SMART activists, the ones who don't do any observable activist activity at all. Rather, they play the game. They vote... sometimes... if they feel like getting up that morning. Yet they order their lives in ways that run right around the voting issues, the politics, and even the laws.

Most of them are not extremely wealthy. Many of them live in the Ghetto, but they know a second language, and have a private address in a 3rd World country where they can run to if need be.

Quite a large number of these S-S activists read the news, watch Internet activist websites, and are ready on a moment's notice to do what it takes to maintain freedom - like flee the country.

So, we have come full circle. Ghetto "ignorants" to Ghetto Super-Smart activists. What in the world kind of a political world do we live in, anyway?

I do not consent to being forced to pay for or spend my time aiding with the pursuit of another's happiness. The process that legitimizes the theft of my time and money rests on the foundation of the electoral process that is controlled and rigged.

I am interested in how best to demonstrate my not consenting to this slavery.

But until someone has a really good argument to sway me, I'm going to find it very difficult to advocate participating in a ritual that is the basis for the justification for my bondage and that of my children and grandchildren.

It really isn't more complicated than that.

So, what does it mean to withdraw your consent. Loads of people have mentally withdrawn their consent. And they are trying to do something about it by voting for a libertarian or independent.

What practical good is it (except for the emotional rush, that is) to not vote? The bad guy still gets in, because there will always be those who vote. And you still need to eat. So you are still under all the same laws that you would have been if you had voted, right?

What, really, is the point? Howard Griswold and Dave deRiemer show the way to do it... if you can get the courts to follow their own rules - which they seem to do reasonably well most of the time. But you still have law enforcement that seems to be more and more oppressive. And none of Howard's and Dave's stuff really has anything to do with not voting. That is, you can still use their processes and vote.

The advertising that is being done by Freedom's Phoenix is great. But we need some concrete answers... something more than a Ghandi style method. I mean, if the country goes so sour that we need to use Ghandi methods, okay. Let's use them. but we aren't there yet, are we?

What should we be doing to keep from getting to the Ghandi position of no control whatsoever? Not voting in itself is being used by all kinds of people in the ghettos. Is it helping them? Are they freer?

Not voting won't "do" anything. The exciting part is what people can do instead of voting, after they withdraw consent and assume ownership of themselves.

James advocates the removal of our consent to be ruled. A very powerful position.

In the 2000 election I was running for Congress and was asked by the editorial page of a major newspaper here in Arizona to encourage people to vote. They were very concerned for some reason about the participation trends and thought that I was on the 'same team' as them.

After the arrests of protesters here last year of the Occupy Phoenix effort I was in communication with one of the editors that is now chief of staff for a city councilman... what I was saying all of a sudden made a lot more sense now that current circumstances made it clearer that I predicted what was coming.

Voting never brought freedom to anyone

There is concern in the halls of government and the media that the ongoing decline in voter participation reflects apathy. More likely, I think, voters are figuring out how the system really works.

Is it working? For the voters best interests?

Libertarian activism operates on the belief that most of the American people know that freedom is good for them – including freedom from social and economic engineering imposed on them by swarms of government agents sent to harass them and to eat out their substance.

Since merely voting for more freedom and less government has never produced anything of the sort, it is small wonder that this method is losing credibility and being abandoned by a liberty-starved populace.

I remember that it was the promise of less government that sent Ronald Reagan to the White House with the overwhelming support of the people. The promise of fundamental reforms sent people into the streets in 1992. In 1994 the promise of a contract with the American people, that a new congress would reduce government finally gave both houses to the Republicans.

In every case the American people were lied to, and the voters know it.

What could astute potential voters be told now that would convince them they can make any real difference at the ballot box?

Even putting aside some major concerns: that vote-counting computers are not isolated from outside communication and possible control; that even court-ordered recounts of a computer-tabulated election are not verified with a manual count; that tens of thousands of unvoted ballots are mailed out and never accounted for; that the justification for automation is speed – yet we still wait days and weeks for final results; that legislation prevents simple verification of the computer program with a manual comparison after the election; that many potential voter’s views are not represented on a ballot tailored to provide special advantages to parties that have been institutionalized as part of the government (crippling competition before it gets established); … even with all that aside, we have a populace that instinctively knows that they are irrelevant to the process.

As an advocate of freedom, I have found that the political process allows an effective method of spreading the freedom message. For the few short months that people may be paying attention, libertarians have a chance to help them understand new questions that should be asked.

Rather than, “Would local control of public education be preferable?” Ask, “Do you support separation of Child and State?”

Rather than, “Which form of income tax is better?” Ask, “Do you believe the government has a right to your income?”

Instead of, “Should we increase defense funding?” Ask, “Do you believe we would reduce threats to the United States by no longer trying to socially or economically control people around the world?”

Rather than, “How do we provide healthcare for children of the poor?” Ask, “How much less would healthcare cost if the industry were deregulated?”

Instead of, “How do you propose to get handguns out of the hands of criminals?” Ask, “How do you plan to eliminate victim disarmament laws so people can protect themselves?”

This influence is now, however, being steadily displaced as individuals use the internet to ask their own questions, and seek answers from people who have first-hand knowledge.

Influence of government and traditional media has been dwindling to the point where Libertarians will soon be begged to participate in National Presidential Debates – so someone will watch them!

But by then, the freedom movement will have already taken to the streets with growing numbers of individuals demanding to be left alone, regardless of any vote totals – whether accurate or not.

Note: This article was written during the 2000 election cycle and has been published in newspapers small and large in 2002 and 2004 as an explanation of what is certain to take place – To be even more informed and frightened with updated information please put the following words in your web browser: electronic vote fraud diebold blackbox voting – that many words will limit the web sites to 143.

“Freedom’s the Answer … What’s the Question.”

First, let me say that I agree with most of the things said about voting for Nobody. But, here is my question. Would that really change anything? If it did, what would it change?

The only way I and millions know how many people voted is through the media. By the time we are down to only 10 people voting out of the whole country, how many millions will the media report as voting?

If 10 people vote for Obama, and the rest vote for Nobody, will the rest of Government shut itself down? Or will they all accept that Obama is President? And what will the military and the police accept?

When Biden's secret service people start betraying the positions of trust that they have been given, when similar happens throughout the rest of big law enforcement as it is happening with regard to guns to Mexico, or prostitution in Mexico by some of our agents, you can see that Government is breaking down from the inside. THEY, the power elite, are going to have to act soon, in a big way, or they will lose everything.

When they come for your guns, when groups of them come for your neighborhood guns all at the same time so that your friends are under the same kind of direct attack that you are facing, will your extended neighborhood step in to help you? Will those in law enforcement who want to see you keep your guns help you? Are YOU ready to shoot first and face the consequences later?

You better be ready.

Trudeau rolled the dice on a snap election. Canadian voters will decide whether his gamble...

Nicholas Kristof starts reaching out to staff for Oregon run

Tucker: This may be the last chance to save California