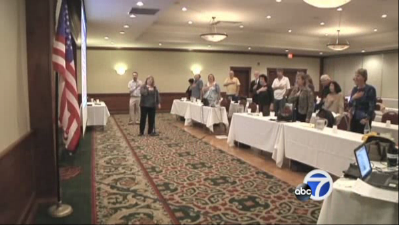 VISALIA, Calif. (KGO) — Some Bay Area residents say they are no longer part of this country. They’ve joined a group that says it has formed its own U.S. government with its own laws and leaders. Individuals with similar beliefs have been linked to crimes, including killing police officers. The ABC7 News I-Team was able to get into one of their meetings for a look inside the Republic for the united States of America and the people from across California who have formed a shadow government for when the real one collapses.

The so-called sovereign citizen movement has grown in recent years but even the FBI doesn’t know how many people are involved. Some experts say there may be hundreds of thousands.

It sounds like it, it looks like it, but this isn’t the old glory you and I know.

We attended the October meeting of the California Assembly of the Republic for the united States of America. People from all over the state, including the Bay Area, gather in the Central Valley town of Visalia once a month to plan for the future.

The group believes an act of Congress in 1871 made the U.S. government a private, for-profit corporation. Members say after that, Congress changed its oath of office and that means the republic can take over.

“Basically as a member of Congress they changed to taking an oath of office to the corporation. At the immediate moment is when they vacated Congress,” republic member Debbie Ringchop said.

The republic has elected its own representatives, senators, even a president. They are waiting for the U.S. Government to collapse, and when it does, they say they will take charge.

“We are really working for the constitutional government, limited government,” Ringchop said.

“It’s a matter of us, being the sovereign that we are to rule ourselves,” republic member Dale Harms said.

“They all have the same set of ideas: the government’s not legitimate, it is engaged in a massive rip-off of its citizens,” Potok said.

“Believing in the sovereign citizen ideology, as unusual as it seems, is not a crime,” Supervisor Special Agent Lawrence Buckley said.

Buckley oversees the FBI’s joint terrorism task force in Northern California. He says the FBI doesn’t get involved with sovereigns unless there is evidence of illegal activity.

“It’s certainly a priority; the biggest concern that I have is individuals who may become violent,” Buckley said.

Buckley says most sovereign crimes are schemes involving mortgage fraud or promises to relieve debt. In fact, the republic’s president, Tim Turner, is in federal custody on fraud and tax charges.

“This man has been traveling around telling people they can get out of certain debts; that they can get free money from the government and a whole series of other falsehoods,” Potok said.

There are also cases where sovereigns, not linked to the republic, have been violent and confrontational. In 2010, Jerry and Joe Kane killed two officers in West Memphis, Arkansas. They died later in a shootout with police. When a sovereign citizen in Idaho refused to leave his camera outside the courtroom, a bailiff used a Taser on him.

In Arizona, Michael Crane is accused of murdering three people. He claims the court has no authority over him.

“I am a sovereign man. I’m a man of flesh and blood,” Crane said in court.

“We come in peace to offer forgiveness to the de-facto who have defrauded this country so badly,” republic member John Gorla said.

Back at the California Assembly meeting in Visalia, the people in the room are about to make it official.

“What we’re doing here today, as a group and I hope as a family, is to say, ‘Yes, I want to be a sovereign living in honor,’” Gorla said.

They raise their right hands and swear an oath of citizenship, swearing “I absolutely and entirely renounce any law form that is antithetical to the Republic for the united States of America.”

The final step is a symbolic blood oath — placing a red thumb print on their new citizenship documents.

“Congratulations to all of you who have declared your citizenship to the Republic for the united States of America,” Gorla said.

The members the ABC7 News I-Team spoke with say they are not violent, but they say they will take over when U.S. the government fails. The group also claims to have U.S. military support; both the Southern Poverty Law Center and the FBI say that is not true.

PureTrust - there are many competing jurisdictions in the current form of government, for example states and federal governments battle for power. Cities and Counties battle for power in overlapping jurisdictions. These jurisdictions battle for power in the courts they don't shoot it out in the streets. I think it will be similar for these various groups. Who ever has the best lawful arguments will win and gain the support of the people if they do ever gain the support of the people. Most if not all of these groups will fail and break apart. If any one of them begins to gain traction, it will be quick and will be immediately obvious which one was selected by the people.

I have seen more than one group like this. There might be dozens. Many of them stem from the work done by Eric Madsen of http://www.teamlaw.net/.

My question is, which of these is the REAL, LEGITIMATE, UNITED STATES OF AMERICA government? Or are they all? If they do take over, are they going to fight each other? Or will they combine somehow?

They better have some good, evident, legal arguments ion their side for when Corp D.C. comes after them.

Damn clever!  Now (at least in Frisco), when people hear "shadow government", they'll think of this instead of the PTB.