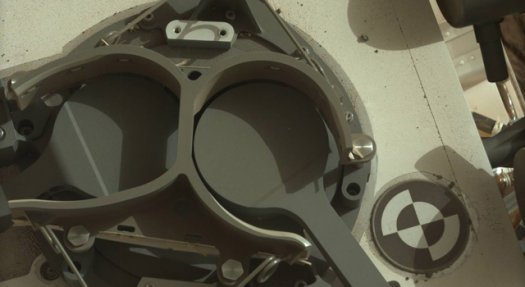 Did the Mars rover Curiosity sniff signs of life last week? It’s not clear yet, but scientists have definitely seen something interesting. Everyone is keeping mum, but potential findings by the Sample Analysis at Mars instrument, one of Curiosity’s prime life-hunting instruments, have Mars-watchers on the edges of their seats.

Curiosity’s principal investigator, John Grotzinger, was quoted on NPR Tuesday morning saying the team might have some very big news soon. “Earthshaking” was the word of choice from NPR’s science correspondent, Joe Palca. Palca was apparently in Grotzinger’s office when some of the data from SAM started streaming in through the Deep Space Network last week. Grotzinger wouldn’t tell, but his excitement was obvious: “This data is gonna be one for the history books. It's looking really good,” he said.

SAM is one of Curiosity’s key science instruments, specifically designed to look for evidence of past life-friendly environments. It is looking for carbon-based molecules, which may or may not indicate life. All life as we know it on Earth contains organic molecules, but organic molecules can exist without any life--scientists have seen signs of carbon compounds on Pluto and elsewhere in space, for instance. Finding them on Mars would definitely be intriguing. At the very least, they’ll indicate that Mars could play host, now or in the past, to organic material. That might, might indicate that it could have hosted life, too.

Astronaut Michael Collins, who circled the moon during the Apollo 11 landing, has died at age 90