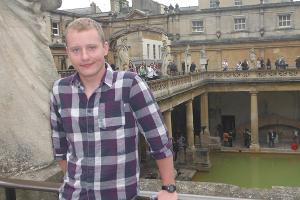 A West Point cadet slated to graduate this year will instead be heading home without a degree after resigning to make a point about religious proselytizing at the acclaimed military academy.

Instead of a degree and commission, in fact, Blake Page could be going back to Minnesota with a bill to reimburse the government hundreds of thousands of dollars for tuition, he said.

“There’s a lot on the line here for me, but I can’t take this … anymore,” Cadet Blake Page said in a telephone interview today. “The officers here have blown me off. They don’t want to do the right thing.”

At West Point, the former Army enlisted man became a leader in cadet efforts to end illegal Christian proselytizing at the academy and favoritism shown by faculty and administrators toward Christians.  Page is president of the West Point Secular Student Alliance.

Mikey Weinstein, an Air Force Academy graduate and founder of the MRFF, likened Page’s actions to those of Rosa Parks, the African-American woman whose refusal to give up her bus seat to a white person in 1955 became one of the milestones of the Civil Rights movement.

“Blake is saying he won’t be part of an institution, he won’t be wearing a [West Point] ring … or be part of this military force that violates his own internal regulations and violates the oath you take to the U.S. Constitution,” Weinstein said.

Page said today he submitted his resignation from the school about a month ago following meetings with his chain of command at the school. But he made the decision public today in a sometimes scathing Huffington Post column entitled “Why I Don't Want to Be a West Point Graduate.”

Page states in the piece that “countless officers here and throughout the military are guilty of blatantly violating the oaths they swore to defend the Constitution. These men and women are criminals, complicit in light of day defiance of the Uniform Code of Military Justice through unconstitutional proselytism, discrimination against the non-religious and establishing formal policies to reward, encourage and even at times require sectarian religious participation.”

At West Point, he told Military.com, leaders routinely let cadets know that one way to be viewed positively by staff and faculty was to take part in Christian prayer groups or attend Christian retreats. During what he expected was an academic counseling session with one lieutenant colonel, he said, took a turn for the theological after the officer asked Page if it bothered him to be called a heathen.

1 Comments in Response to West Pointer Quits Over Proselytizing

I guess not only are there no atheists in foxholes, but there are none allowed in the Army anymore.  I have read reports of people punished or passed over for promotion for being an atheist or the wrong kind of believer over the years.  And my spy at West Point years ago who became a believer told me many a story that had me nodding to keep him talking.